Black Friday Deals – Spend Your Money, but save Your Life!

By Daniel Worku on November 15, 2013Comments Off on Black Friday Deals – Spend Your Money, but save Your Life! 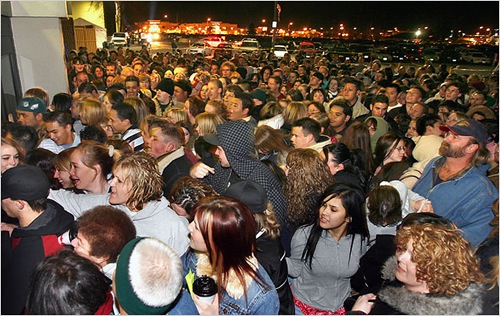 Black friday deals are looking to be just as juicy as ever as Thanksgiving 2013 approaches. While shoppers and merchants hurriedly prepare for the landmark shopping event, it seems necessary to recognize that this much anticipated retail extravaganza can be a deadly as it is lucrative. The mood and energy present in some of the lines which form outside of the nations larger retail stores have the potential to convince the unexperienced country-dweller that the zombie apocalypse is well underway. As black friday approaches this year, there are some important principles to keep in mind so that you can happily spend you money, but save your life to enjoy your purchases.

It is quite interesting to see the level of frenzy that often accompanies the kick-off to this shopping showdown of hungry consumers. This atmosphere seems to be intentionally manufactured by the countless advertisements, blurbs, signs, billboards, and radio plugs, constantly seeding the suggestible public mind about how this years deals will be better than ever. The energy and frequency of this media frenzy, galvanizes the debt burdened public into spend-crazy, deal-hunting, sale-seeking, mob with zombi-like determination. Black friday, is perhaps one of the most powerful combinations of words that can be spoken together to elicit such a passionate response from an individual, causing one to brave dangerous conditions for deals on products they were previously oblivious to.

It is true that there are some of the most attractive deals of the year presented during the event now known as black friday, but there are some dangers to be aware of for those who decide to get an early start on the action. Black friday has come to be almost as dangerous to your physical health as it is to your pocketbook. In 2008, holiday shopping violence escalated to cause perhaps the first black friday fatality.  A mob of about 2000 people had been lined up outside of a Long Island Walmart, and prior to the doors officially opening the mob pushed their way into the store, trampling a 34-year old employee in the process.

It would be nice to say that this ended the type of mania that is usually seen in the early goings of black friday. However, just a couple of years later in 2010 a woman in Wisconsin threatened to shoot other shoppers outside of a Toys ‘R’ us, there was a stabbing at a Georgia Toys for Tots, and there was deja vu in New York as a man was trampled a Target storefront when deal-hungry shoppers stampeded into the story in an attempt to be first to the deals. The action didn’t end in 2010, as the violence, arrests, unruly behavior, and threats have continued through 2011 and 2012. So, as black friday 2013 approaches, what steps can you take to make sure your spending your money safely?

Eskedar Searcy, a mother of two from the North Dallas suburbs has some advice. “If you are looking for a particular item, and you know its going to be on sale, it might be worth braving the crowds to be first in the door. Otherwise, if you don’t know exactly what you want, or the item you want is not going to sell out, then maybe let the crowds go in first and enter after the chaos.” She said that she rarely braved the rabid crowds to be first out of the gates, and suggested that some of the higher end retailers generally have more docile and well behaved patrons. If the black friday deals tempt you to spend your money at the mega-retailers, and areas that draw more aggressive crowds (such as video game stores etc…), and you decide to brave the danger, keeping your eyes open and head on a swivel might help you spend your money while saving your life in the process.