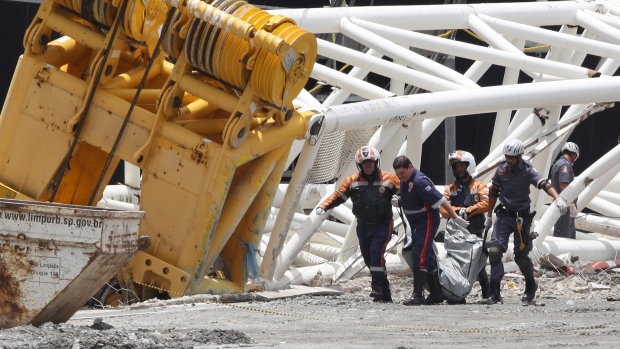 As Brazil struggles under the watchful eye of soccer fans everywhere to get ready for the 2014 World Cup, a devastating collapse on Wednesday afternoon of one of their stadiums kills two and leaves others injured. Things have started to go drastically wrong as the rumours spread that perhaps the country is unable to handle the weight of the upcoming games.

The collapse took place at the Arena Corinthians as a crane reaching its highest level tipped over a metal façade on the eastern exterior of the stadium. An LED screen was also knocked from the peak of the building. Numerous reels of footage display the crane buckling over resulting in the collapse. Fortunately, a majority of workers were on their lunch break or the catastrophe could have easily killed many more.

December’s expected date of completion of the damaged arena despite the claims by Odebrecht Infrastructure (the company building the site) that the infrastructure of the building is still perfectly sound.

Fifa, the governing body of the World Cup, has made it very clear that “no compromise” would be accepted in their expectations of Brazil and it’s 12 venues. Brazil was only required to have eight stadiums but in an overly ambitious attempt to spread the World Cup experience around the country, they committed themselves to 12. The costs of these plans are starting to be counted in human lives.

As is standard in such situations, Fifa has headed their own investigations of what went wrong in Brazil on Wednesday afternoon, but have been very hesitant to place the blame. In the complete reverse, union officials have made it very clear they feel that safety regulations have been ignored. Speculations have risen as rumours suggest that supervisors were aware of the rainy circumstances and had been warned of the resulting unstable ground.

Protests had already started prior to the incident at the Pantanal, in the western city of Cuiaba. The people of Brazil have started to ask  “World Cup for whom?” as they lined up during a building inspection at the venue. With costs for individual stadiums ranging over 140 million dollars, it is no wonder that the people are starting to question if perhaps the money could be better spent on health and education. 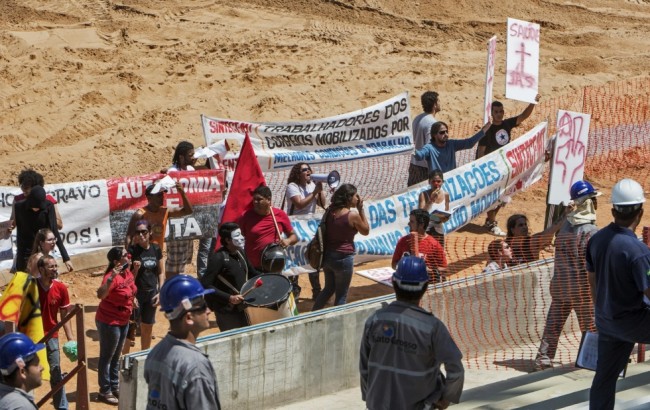 Secretary General of Fifa, Jerome Valcke has asked that the people of Brazil take into account the long-term benefits of the games. He has been sympathetic towards protesters quoting that “people have freedom and that is part of democracy.” Valcke also told media that protesters need to return the same sympathies and respect that the workers at the construction sites are not to be targeted in the protests for doing their jobs.

Rumours aren’t just spreading about the death of the two workers after the collapse of the stadium though. Cuiaba, a host city of the games, has made it clear that not only will they be incapable of completing the building dead-lines but sports fans hoping to visit Brazil should also anticipate troubles booking rooms due to a shortage of hotels.

As workers, Brazil and the world together wonder what could have saved the lives of the two that were killed in the collapse of a World Cup stadium, only when the games finally arrive will sports fans be able to tell if the country was able to finally pull it all off.