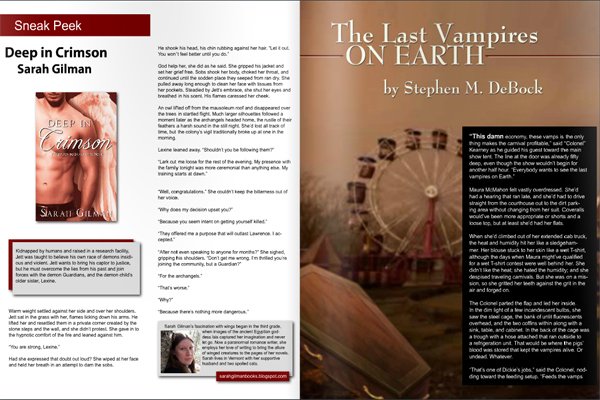 BTS Book Reviews is an emagazine that contains the latest reviews of the hottest Romance books, as well as the most recent and best reviews of the SF, Paranormal Romance, Mystery, and Horror genres. Read in the pages of this engrossing emagazine interviews with some of today’s best-known authors, and also learn about new literary rising stars. It’s also a great place for up-and-coming authors to get noticed, and gain wider attention and publicity.

There are an average of 12 authors showcased in each issue of this very interesting publication, and excerpts of their work are included along with reviews. BTS Book Reviews also contains author interviews, so people who read it have access to more information about their favorite authors (or soon-to-be favorites) than if they just read a run-of-the-mill review.

BTS Book Reviews highlights authors from big names to newbies, and everyone in between. Some well-known authors that they’ve interviewed in their emag include Lori Foster, who was interviewed this month; Kristine Painter, the focus of last month’s interview; and Kat Martin & the horror author, Jonathan Maberry, who were both interviewed in September’s issue.

The majority of the authors which are showcased in BTS Book Reviews write in the romance genre, but they include all the major genres in each issue: Paranormal, Horror, S/F, Fantasy, Mystery/Thriller & YA. By doing so, the emagazine appeals to a very wide audience of varied reading tastes.

Some of the recent reviews that have been in BTS Book Reviews have been Gathering Storm by Victoria Danann, To Catch a Princess by Caridad Pineiro, Always on my Mind by Jill Shalvis, Primal Flavor by Danica Avet, The Plague Forge by Jason M. Hough, Prophecy of the Guardian by J. W. Baccaro, and Against the Mark by Kat Martin.

Besides hooking up people who love to read with some of the best authors around, BTS Book Reviews also provides services to both up-and-coming and established authors to enable them to reach a wider audience.

For instance, establishing name recognition can be very important in attracting more readers, and getting good publicity for your books can be like money in the bank to authors. Sure, it’s great just to be read by someone who likes what you’ve written and who gets you; but, it’s even nicer to have all of that, and also have people buy your books with cold hard cash.

BTS Book Review emagazine is a relative newcomer to the book reviewing scene,  but they have built up an impressive following and readership. The BTS stands for Book & Trailer Showcase. It began in December 2011 to aid authors in promoting their work, and in April 2012, the first emagazine was published. It went from being published once a quarter to monthly in November 2012.

Authors have the opportunity to be featured in BTS Book Review and have tens of thousands of readers (30,000-60,000 per monthly issue) get to know them up close and personal — and increase their sales — and people who love to read great books have a way to get to know the man or woman behind the book, and add fantastic literature to their libraries.

Myra Nour is the CEO of BTS, and I will interview her in the near future, so that you can read more about the woman behind the magazine, the love affair that readers develop with the books that they read, and how to be featured in BTS Book Reviews if you’re an author. Dawn Seewer is their very talented Executive Designer.

Besides the book reviews and author interviews, each issue contains entertaining and informative columns for both authors and readers. An average of 12 authors are featured in every monthly issue of BTS Book Reviews. Subgenres like Urban Fantasy are also covered.

Where can you read BTS Book Reviews emagazine?

For now, you can read back issues of BTS Book Reviews free at their website. A link to it is at the end of this article at BTSEmag.com. It will become available to purchase soon, direct from Barnes & Noble, and then BTS Book Reviews will be available to an even wider audience. Anyone with a Nook or Nook compatible device like an Android, iPhone, or iPad will then be able to read it on the go or at your house.

For anyone who loves to read a wide variety of genres,and likes to check out book reviews before you buy a book, you owe it to yourselves to check out an issue or two at the link below. See for yourselves what BTS Book Reviews is all about — once you do, I’m sure that you will love it and that you’ll want to read it every month!