By Tina Elliott on November 20, 2013Comments Off on Charles Darwin: Challenges Within Legacy 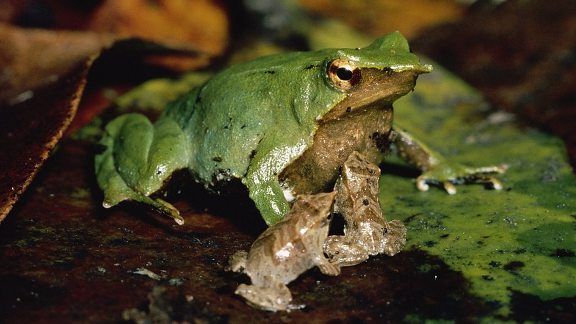 Charles Darwin, the father of evolution as he has been called over the years, would be extremely worried to hear what is happening in today’s world.  Sadly, two frog’s that Darwin has discovered and was named after, are now extinct!  Darwin’s Frog and Chile Darwin’s Frog are now proclaimed extinct from their local habitats located on the Coast of South American and in Chile.   The Darwin Frog has not been seen since January 2013, and the Chili Darwin’s Frog hasn’t been seen for month’s according to Chile and Britain scientists.  A disease called ‘chytridiomycosis’ is to blame for the disappearance of these beautiful creatures.  Such issues really show how delicate our natural world is, especially when creatures from Charles Darwin legacy are dealing with such severe challenges.

The zoological Society of London and  Universidad Andris Bello have made the claims of this severe disease and that it did wipe out these frogs.  The phenomenon of extinction by infection is only known by a few cases.  Both of these frogs are cousins and have been named by the wonderfully renowned naturalist and evolutionist Charles Darwin.  While both frogs did live on the coast of South America, as its name implies, the Chile Darwins Frog was endemic to that country only.  During his trip around the globe, Charles Darwin discovered in South Chile the frog species called Rhinodermatidae darwinii in 1834.  The frog species, that only got as big as 3 cm, have an absolutely unique look about them, a leaf-like body and pointed nose was evolved in order to blend into its surroundings.  Such camouflage is very important to many animals in our natural world in order to survive.

Sadly, it is possible that this virus killed both species, but there is no research to fully conclude this theory yet.  The Scientists claim they know that such a quick disappearance can not only be associated with habitat problems alone.  In order to learn more about these and other frog specimens in simalar habitats, hundreds were collected for study in the years of 1835 and 1989.  Of these specimens collected, DNA was taken in order to identify the fungus that causes the virus chytridiomycosis.  It does look like these unique frogs died off very quickly, as researchers were doing surveys from 2008 into 2012 for the presence of the lethal disease.

Having this species, among thousands of others lost each day, is a huge loss to our natural Earth.  The impact is more devastating that many people come to realize.  Amphibians have lived on this planet for about 365 million years, far longer than any mammal has ever existed.  These special critters keep our crops healthy by keeping insect plagues under control as well as protecting us from famine and disease.  It just tears me up in knowing that these wonderful creatures are gone for good.  Not only were these frogs unique in stature, but they when they breed the female lays her eggs on the males underbelly, the tadpoles develop on the male and when metamorphosis happens they turn into tiny froglets. Their dad then protects them for a while longer.  He will even place them into his mouth when he feels danger is present.  This, beautiful, unique creature is gone forever….we need to help other related species from disappearing as well.

Do you remember when you learned about Charles Darwin and his studies in the Galapagos Islands?  Well, another species that is under severe threat from extinction too!  The Galapagos Finches are in extreme danger from parasitic flies.  The birds all belonged to one group, but eventually spread out to 14 species across the island.  These birds were one of the first animals collected on Charles Darwin’s adventures and the species helped give him the theory of how evolution worked.  Charles Darwin was the first to think of geographical isolation, the environmental effects on species and why they developed so differently from their ancestors.  Now two of the species are critically endangered, according to The International Union for Conservation of Nature.  The threat comes from a common fly that was introduced from Brazil and other South American Countries in the 1960’s.

Another problem that is currently happening again, is certain accusers are trying to defame the intellectual Charles Darwin as a fraud according to a controversial program that was aired earlier this month on BBC.  This isn’t the first so-called attack that has been brought upon his good name, and coming from a controversial program claiming to have proof of his misgivings that have no presidence is downright ridiculous.  This program claimed that Charles Darwin stole the Theory of Evolution from Alfred Russel Wallace from Usk in Monmouthshire, as this naturalist supposedly sent letters to Darwin about such a theory and that when he stole the idea he kept it secret.  Of course one of the contributors to the show is Roy Davies, the author of the Darwin Conspiracy.  That book has been out for quite some time and has not proven any of the research claiming that Darwin has stolen such ideas to date so far.  It can be a tedious read for those who aren’t used to older biological jargon etc, but I suggest anyone should read the variety of books Charles Darwin has written, including this controversial Darwin Conspiracy.  The facts and so-called allegations are interesting, but with little to totally prove such allegations, it will as always be considered another flop to degrade Darwin’s name unless it can be proven with solid facts.