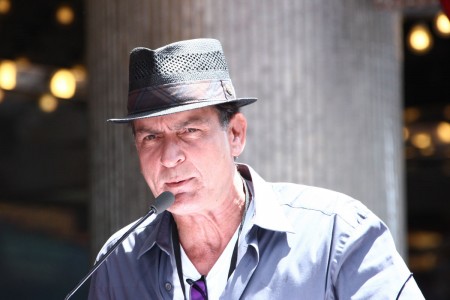 Over the past weekend Charlie Sheen raged against child and family services and a judge he dubbed Judge Douchebag today he much happier after his epic win against ex-wife Brooke Mueller. She had asked for an emergency restraining order against the actor while they fight over the custody of their two sons, Max and Bob.

The 48 year-old actor raged that if “Judge Dishonorable Douchebag” wanted to “bring it” he would burn the house down. Besides the judge initially taking action against Sheen, the DCFS were none too happy at Sheen’s allegations that the department had put his two sons at risk. Charlie maintains that he told the organization Mueller was a danger to her children and they should not be allowed to see her unsupervised, let alone stay overnight with her.

Sheen got onto his Twitter account to vent his spleen about the legal system and the judge who was backing up his former wife in the battle. Mueller lost custody of the children earlier in the year and Charlie’s second wife Denise Richards was named custodian of the boys while Brooke was involuntarily placed in rehab at the Betty Ford Center.

Now that Mueller is out, she has revealed plans to get their sons back in her care and Sheen is furious about it. His tweets blamed the Department of Child and Family Services (DCFS) with handling the case poorly and not responding quickly enough when he informed them that Brooke was an unfit mother,.

Charlie Sheen was also angry about the “gag order” imposed by the judge dealing with the custody battle. Sheen ignored it and threatened to hold interviews from his jail cell if he was arrested for disobeying the court order. As with other things with his life, if it upsets Sheen, he talks about it. However, his epic win against ex-wife Brooke Mueller and her request for an emergency restraining order, will obviously put the Anger Management star in a better mood. In which case he may feel more like obeying the no-talking rule imposed by the court.

The former Two and a Half Men star ranted against his ex-wife and called her the “worst mother you could draw” and claimed to have security forces surrounding Brookes house in case the twins were in any danger. Earlier in the year, Sheen petitioned the court to stop child maintenance payments to Mueller arguing that the boys were not living with her, but with his other ex-wife Denise Richards.

On Friday, Mueller spent her first night with the boys since they had been taken away. Sheen was furious and he allegedly threatened the child services organization with action if anything happened to his sons while they were with their mother. Speaking to TMZ Live last week, he said that he would use every resource to keep Mueller from gaining full custody.

Because of his tirade on TMZ Live, authorities banned him from seeing his sons while the were at Denise Richards’ house. The boys returned to Denise’s home after their Friday night stay over with their mother. After Charlie was banned on Saturday from seeing Max and Bob, Mueller petitioned the court for an emergency restriction order against her ex-husband. But Charlie Sheen got another epic win against Brooke and her restraining order. Round two to Charlie Sheen.