Comet ISON May Have Lived Through Sun Encounter after All 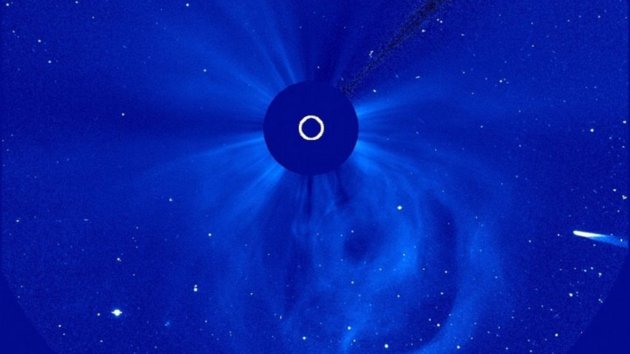 Comet ISON, or at least part of it might have lived through its encounter with the Sun after all, scientists are now telling the general public. The colossal dust and ice ball had been feared a causality of its trip behind our personal star. It failed to re-materialize and so was prematurely declared “dead”.

The only image that showed up on space telescopes was a dismal splotch. There were no tail or nucleus to be seen anywhere. Yet, more recent pictures are showing what appears to look like some sort of brightening from a tiny comet portion.

Astronomers are saying they are both stunned and happy with what has occurred, but now fear that anything might happen in the upcoming days or even hours.

This part of Comet ISON may get even more brighter or it may fade away completely.

Kat Battams, who is a scientist that is operating the Sungrazing Comet Project, stated that astronomers all around the world have been watching Comet ISON for almost a year and that through all that time the comet has been confusing and surprising them.

He added that with Comet ISON, that everything seemed to be typical, yet at the very end when it was believed to have been destroyed from the Sun,  that within just a few hours or so it ended up showing up again on the telescope screens.

The European Space Agency, which was among the very first of all space administrations to ring out the death toll of Comet ISON, have also had to change what it believed has happened in the situation.  Some of its astronomers are saying, as well, that it is possible that a minor part of the nucleus may have been left intact.

Many thought it had been destroyed when none of the comet showed up in any pictures where it ought to have been seen. It still is unknown just how much may be left of the once gigantic hunk of ice and dirt.

Comet ISON is believed to have passed around the Sun at about 1.2 million km away from the surface. If it was that close, the Sun would have severely messed up quite a bit of ISON’s surface. The ice it carries would have evaporated quickly in temperatures that were over 2,000 C. The enormous pull of gravity from the Earth’s personal star would also have dragged and pressed on the comet as it tumbled through space.

Dr. Battams explained that astronomers need at least a couple more days to examine other images as they come in from space telescopes, so they can begin to calculate the intensity of Comet ISON that is showing up now, and how that glare might happen to change. By watching the brightness, scientists will be able to have some idea of what ISON is made up of and what the comet may do in the upcoming days. Whatever does end up happening next, comets are definitely going to be a main news feature in the New Year.

In around 11 months from now, Comet Siding Spring will fly past Mars at about 100,000 km away. In November of next year, the European Space Agency is planning on a mission to attempt to send a probe up to land on Comet 67P.

However, as for right now, everyone continues to wait to see what is left of Comet ISON and how much of it, if any, survived its encounter with the Sun.