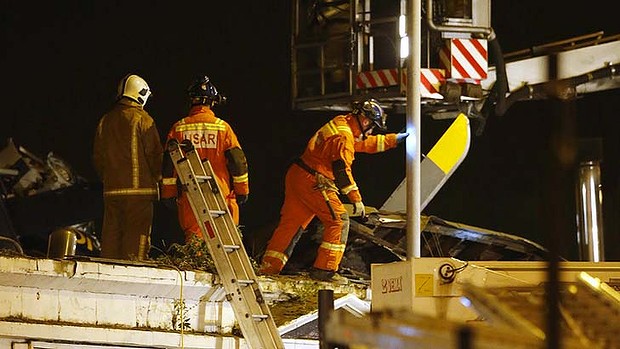 On Friday night, a police helicopter crash into the roof of a crowded pub in Glasgow, Scotland called The Clutha Bar, caused numerous casualties. A number of people were trapped under the resultant debris, according to eyewitnesses and rescuers on the scene. There are casualties, but it’s too early to determine exactly how many people perished due to the helicopter crashing into the roof of the pub.

The remains of the one-story building must be made safe, according to the Scottish Fire and Rescue service, before victims and survivors can be pulled from the wreckage of The Clutha Bar, located on the banks of the River Clyde.

In a written statement, Deputy Chief Constable Rose Fitzpatrick stated that there were “a number of casualties” but added “it is too early at this stage to provide further details.”

According to Scottish police, the crash occurred at 10:25 p.m. local time. The helicopter was flown by a civilian pilot and was transporting two police officers when it crashed into the roof of the pub.

Just a short time before the crash happened, the 9-piece ska band, Esperanza, had taken the stage in The Clutha Bar and had begun performing.

Jim Murphy of the Labour Party, a member of the UK Parliament and represents Glasgow, arrived at The Clutha Bar shortly after the helicopter crash and he saw people attempting to exit the pub. He stated that he saw 10 people or possibly more who were injured, and noted that some were bleeding from head wounds. He helped rescue people from the pub.

Murphy said that it “was a horrible, horrible scene” and that people formed a human chain so that they could get the people trapped inside out.

According to Grace Mclean, who was inside the pub listening to the ska band with a friend when they heard the helicopter crash into the roof, said that “there was kind of like a (roof) panel fell.” She added that the band joked about not thinking that “we were going to bring the roof down.”

Maclean said that she was sitting next to an older man when the crash occurred, and the man got cut on his head by debris caused by the crash. She said that there “was no explosion. No bang. It was really quiet. There is no fire.”

The editor of  the Scottish edition of the Sun newspaper, Gordon Smart,  said there wasn’t a fireball and “I did not hear an explosion.” He  stated of the helicopter that “It fell like a stone” and added that “the engine seemed to be spluttering.”

The Facebook page for the ska band Esperanza indicates that all of the band members made it out of The Clutha Bar safely.

According to a spokesman for the Scottish Ambulance Service who was interviewed by a reporter from CNN, there were “multiple ambulances and a special operations team on site.”

There were approximately 120 people inside the pub when the helicopter crash occurred, according to witnesses. The fates of the Eurocopter EC135T2 helicopter pilot and the two policemen who were passengers inside the helicopter have not yet been reported about.