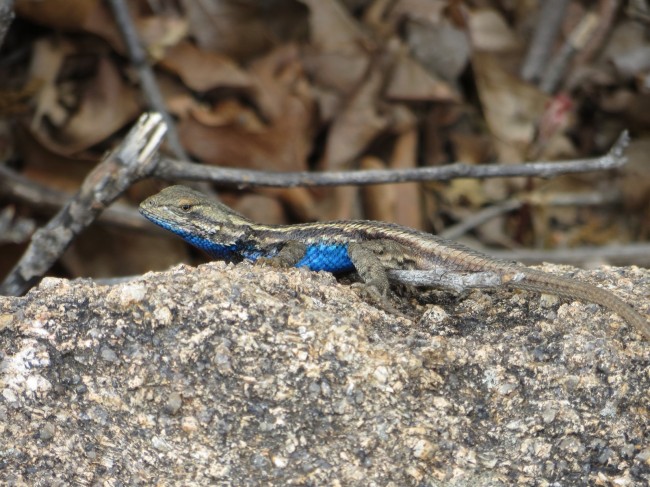 A particular species of male lizard lusts for female companions of the less blue variety, according to a brand new study.

The research findings was recently published in the online issue of The Royal Society journal Biology Letters, on Nov. 6, 2013, and indicates that male lizards are perhaps a little

more fastidious in their selection of mate than previously thought.

The lizard in question is the eastern fence lizard (Sceloporus undulatus), a relatively mid-sized lizard, endemic to much of the eastern United States. Sometimes colloquially referred to as the prairie lizard, or pine lizard, the creatures typically inhabit the outer edges of forests, gathering around tree stumps and decaying logs.

The eastern fence lizard is approximately four to seven inches in length, and is covered in coarse scales. In terms of color, the reptile is often a shade of gray/brown, with a distinctive dark line apparent along the back of its thigh and a white strip running down the center of its underside.

Coloration is a particularly fascinating feature of the eastern fence lizard and was something that Tracy Langkilde, an associate professor of Biology at Penn State University, alongside graduate student Lindsey Swierk, has investigated in relation to mating behavior.

Using lizards collected from Alabama, Arkansas and Mississippi, the pair investigated the blue color patterns that are often attributed to the male population of eastern fence lizards, but also observed in many female members.

Male Sceloporus undulatus lizards have eye-catching blue stripes that appear along the edges of their abdomen and necks. Prior scientific study performed by Robert M. Cox and his colleagues, entitled Testosterone Regulates Sexually Dimorphic Coloration in the Eastern Fence Lizard, Sceloporus undulatus, explains that these blue/black ventral patches serve as a sense of sex recognition and “intrasexual social signaling,” becoming increasingly visible during ritualistic courtship.

Cox and his colleagues experimentally deduced that these color changes were related to sexual divergence in plasma testosterone of males and females. They chemically castrated a group of juvenile male lizards, a process which eliminated the primary source of the sexual hormone, and found the development of their characteristic blue badges was impeded; restoration of plasma testosterone then resulted in the blue stripes making their return.

These colorations are either markedly diminished or are entirely absent in female and juvenile male lizards. Nonetheless, there are many female eastern fence lizards that do possess this characteristic blue ornamentation.

Langkilde goes on to compare the sexual characteristics of the lizards to that seen in humans. Whilst human males develop facial hair, females also have a tendency to develop male-pattern facial hair, to a much lesser extent. In a recent press release, she goes on to elaborate on the comparison drawn:

“However, whereas in human females the masculine characteristics are less common within the population, in fence lizards, we see the opposite pattern: About three quarters of the females are so-called ‘bearded ladies,’ making masculinized females much more common than their counterparts with little or no blue ornamentation.”

Langkilde and Swierk conducted field observations and laboratory experimentation, with the primary ambition of discovering whether male lizards preferred these so-called “bearded ladies,” or whether their sexual proclivity leant towards females without the blue ventral patches.

From their study, it appears that the eastern fence lizards favored females without the blue coloring – although, they would still mate with these masculine females, albeit with less frequency. The researchers set about trying to fathom why this was the case, electing to explore whether the coloration caused male lizards to confuse females for fellow males, or whether it was because they somehow deemed females with more prominent blue markings as less suitable mates; from additional observations, it seemed like it was a case of the latter.

Badges an Evolutionary Disadvantage in Females?

The bearded lady lizards laid clutches of lower mass, on average, 13 days later than their more feminine counterparts. Langkilde offered her insight into these intriguing findings, positing that these eggs could contain smaller yolks and, therefore, fewer nutrients. Meanwhile, the 13-day disparity between the two female groups imposes a tougher challenge for females with blue ventral patches, who lay their eggs much later, meaning there is a delay in hatching. As a result, these females will struggle to source enough food before winter hits – a grueling period that kills many newborn lizards.

In light of the afore-mentioned findings, it appears that female eastern fence lizards with less striking blue ventral patterns have a major evolutionary advantage.

It seems that these changes are leading to broader sexual dimorphism, with greater difference in the physical characteristics between male and female populations of Sceloporus

undulatus. This would be similar to male humans being larger than their female counterparts, with more prominent brow ridges and greater distribution of body hair. Another example is seen in the Common Pheasant, where males and females demonstrate dramatic variations in color and size.

Langkilde spells out what this could mean for future generations of female eastern fence lizards:

“In time, the percentage of bearded ladies could dwindle and the balance could shift. However, another possibility is that bearded ladies have some other evolutionary advantage that keeps their numbers high within populations.”

Indeed, it has been suggested that these testosterone-fuelled females might be better equipped to fight off predation, whilst warding off sexual competitors. Another theory the twosome have considered is that these unwanted females produce “sexy sons.”

The pair had presented previous research to show that females were attracted to males with vibrantly blue ventral patches. On this basis, they speculate that the bearded ladies could pass on their colorful traits to their male offspring, thereby conferring an advantage to future generations of males. When the pair investigated how female eastern fence lizards selected their male partners, along with research colleague Matthew Ridgway, they found a number of physical and behavioral factors came into play; the following passage, extracted from the group’s journal, entitled Female Lizards Discriminate Between Potential Reproductive Partners Using Multiple Male Traits When Territory Cues are Absent, summarizes some of the features that female lizards look out for in a potential partner:

Although the team have shown that eastern fence lizards demonstrate greater lust for more feminine partners, the pair have yet to conclusively prove the evolutionary advantages and disadvantages that these brilliantly blue patterns bestow in females. With such immense passion for their work, however, the pair will likely get to the bottom of the issue remarkably quickly.