Egypt Government Will Not Tolerate Protests 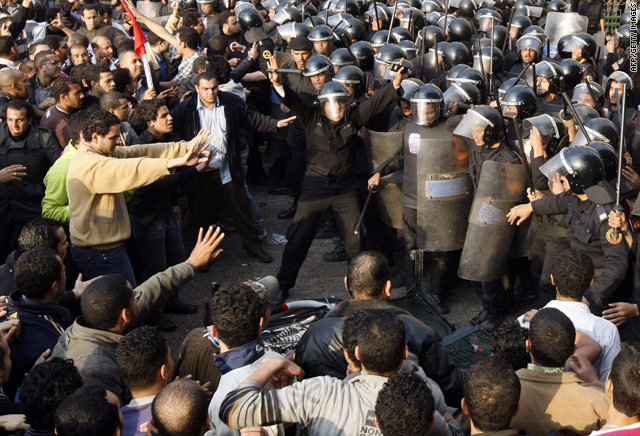 The government in Egypt has previously made several unorthodox efforts to stop protestors from gathering in the streets, and has now made yet another move to quiet civilian voices. Officials say that Egypt government will not tolerate protests that aren’t given permission and have issued a law that no assembly can be made without permissions from the police. Egyptians also are not allowed to protest government actions in places of worship, either, which creates a new question: How far is the army willing to go to silence civil opinions?

Head of the army, Abdel-Fattah El-Sisi, has issued many regulations of this kind. He has sent his army out into the street to arrest people for simply holding a sign supporting people who were murdered in Rabaa square a few months ago. Many of those arrested are neither put on trial nor released to their families. Instead, they are kept in jail until further notice.

This action has only caused Egyptians to be even more resolute in their decision to protest. Every Friday, a new wave of people take to the streets to stand up against El-Sisi and demanding that he listen. The government in Egypt still will not tolerate protests or those who ask for their right to organize.

It may seem that this new law El-Sisi has released it actually a helpful rule in order to allow people to protest without harm or foul. However, getting permission from the police to organize against the government is just impossible, especially when said government is jailing people just for saying they don’t like what’s going on in Egypt.

A blatant example of this was the incident with Bassem Youssef, an Egyptian show host, who made a joke about the government of Egypt on his show, “El-Bernameg.” The following day, Youssef’s show was taken off the air, and the entertainer left Egypt.

If an entertainer can’t even make a joke about the government without getting in trouble, how can anyone be confident enough to ask permission to organize a protest, however peaceful? It would be a stupid move to openly admit to an officer that one is against the current government, because as seen in the past, even opinions are not allowed in the country.

In another instance, a group of college students gathered together to discuss what they believe is injustice being done by the government. Police officials attacked the students and many of them were thrown in jail without a proper trial and have not been let out. It was not even a true protest. They were just a group of students discussing their opinions. For some reason, that is still illegal.

This move is nothing more than another attempt to silence people who do not like a corrupt system. Whether President Morsi’s forced removal was indeed a coup or not, the Egyptian people have the right to make their opinions heard. Egypt government will not tolerate protests, peaceful or not, regardless of what they say. El-Sisi and his team are not to be argued with. Period.