By Michael Smith on November 5, 2013Comments Off on Guy Fawkes Night Fireworks Bonfires and Evolved Traditions

When November 5th meant "Penny for the Guy?" 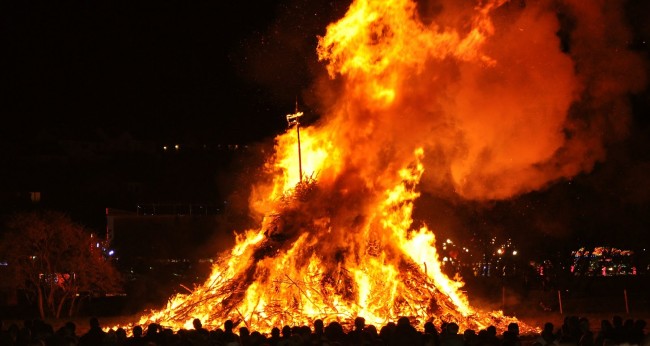 When the film V Is for Vendetta came out in 2005, the world was reminded of the old Guido “Guy” Fawkes and his part in the infamous gunpowder plot of 1605. This nefarious plot to blow up the House of Lords ended badly on November 5 when the plot, and Guy, were rumbled by authorities. Since that day, denizens of England have celebrated that day with fireworks, bonfires and effigy burning. It has also turned into a event with evolved traditions. Changed by the very times we live in.

Since moving to the United Kingdom courtesy of Uncle Sam over 31 years ago, this writer has seen the very nature of Guy Fawkes Day, or as it is more commonly referred to Bonfire Night, change in the way that it is celebrated.

Back in 1982, on top of each village erecting their own huge bonfire for the celebration; citizens, and town councils purchased fireworks and the village children would gather on the sidewalks, as well as from house-to-house to ask for “a penny for the Guy?” Remembering small kids pulling a worn wagon behind them with its “guy” made of straw and dressed in cast-off clothes donated by their parents no doubt.

The “formal” idea was that the pennies raised would buy more straw and perhaps a better wardrobe for old Guy. The reality was that the kids would count up their days take and by as many “bangers” (firecrackers) as possible. If one wandered down to the village bonfire area, generally a piece of land donated by a local farmer who might be on the local council, you would see a few “Guys” on the wooden pyre.

You would also see a great many of those same industrious children setting off loads of bangers. The burning of the pyre was combined with fireworks, official ones, and candy floss (cotton candy), sausages and beef burgers (hamburgers) and other treats. There would be music, preferably from a local band and a DJ if no band was to be found for the night.

Of course the event was grander, the bigger the village. A town or city would make a proper celebration. In Suffolk, for example, at Christchurch Park in Ipswich they have a huge celebration. Bands, music, demonstrations, an enormous bonfire and themed fireworks. One year the theme was Bond movies and another year it was space movies. These fireworks, while not on the scale of America’s Fourth of July, are pretty damned spectacular and just as exciting.

The celebration, which used to be a good excuse to set up a beer tent in some farmer’s field that the village could let off some steam just after daylight savings time rolled the clocks back, has changed. Sure the whole thing started as Guy Fawkes Night; loaded with fireworks, bonfires and a burning of the “Guy,” but, its tradition has evolved into plain old Bonfire Night with less focus on the straw effigy.

31 years ago, when this writer first witnessed the build-up to Bonfire Night, yes it was called that even back then, every village had groups of kids asking for a “Penny for the Guy.” As the years sped by, the “homemade” straw effigies of that old plotter Guy Fawkes disappeared. Times have obviously changed. The children of a village can no longer go from door to door asking for money. For one thing, not everyone is familiar in the villages anymore. A lot of “city folk” (that’s usually spelt London) have bought property in the rural areas and are actually strangers in the place they live.

There are more crimes against children now, and honestly, children are not that “innocent” these days. Television, the internet, and life have changed the world that youngsters live in. In the current climate, kids would be as hard pressed to sustain the interest as they would be to find straw affordable enough to make their Guy.

It is also illegal to sell “bangers” to underage children now. Sure it always has been, but years ago it was not so stringently adhered to. Now it is all about the big themed displays of fireworks and bonfires that now one gathers around. It is about selling snacks, drinks and glow-in-the-dark ropes and tubes. Bands, music, and maybe, if no one has forgotten it, a “Guy” to be burnt.

This is not a recent phenomenon, it has been steadily changing for years. But sitting here in front of a laptop and hearing what sounds like World War 3 going on all around the house, it is sad to think how it used to be. The children coming round the house knocking on the door and explaining to the foreign “thick head” about the local traditions and stepping back to proudly display their “Guy” was fun.

Searching for odd bits of change and the cheerful advice to not spend all of it on “bangers” was just as cheerfully accepted with the small lie that “of course we won’t!” This made the beginning of the long nights less gloomy and it made the village seem small and close. Things have changed, like the children and the villages.

Guy Fawkes Night and the traditions of its celebration have evolved into fireworks and bonfires. The two things have become inseparable. With poor old Guy being left out in the metaphorical cold instead of on the warm bonfire.