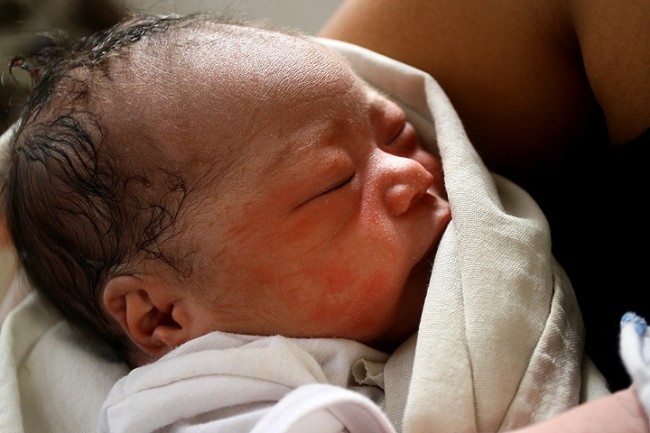 Philippines hospital Sees Typhoon baby Die as 3 day old is unable to be saved. Her entire life span consisted of fighting for her life – through the wreckage of Typhoon Haiyan and being fed by her parents as they manually attempted to pump oxygen around her body with something that looked like a tiny bottle connected to an oxygen tank. Unimaginably, her parents were ridden with distress after being hit with the crippling effects of not only a natural disaster on an almighty scale, but additionally being told by the nurse that if they stopped their baby would die without suitable hospital care. The only visible sign of life was that of her heartbeat. Their child did not manage to make it past three days and died this Saturday. A physician reported that her parents wrapped her body in a blanket as tears stained both their faces. The loss they felt can barely be envisaged, accompanied with their recent losses from the Typhoon.

The prehistoric Philippines hospital had no power and no access to the medical equipment needed for patients. Althea Mustacia was one of the many who could not be saved. She was born with asphyxia, a condition arising when the body is deprived of oxygen which causes problems such as causing unconsciousness, suffocation and as seen in Althea’s case, death, as the hospital sees the typhoon baby die.

The World Health Organization stated that this was a common cause of death for children born in developing countries. With an appropriately hygienic and well equipped hospital this condition can be seen to effectively. With the results from the Philippines, Althea’s parents were lucky that they were able to keep their child in a makeshift hospital. Her parents are comforted by the fact that this underdeveloped safe haven was able to help provide their baby with the oxygen she needed, in order to survive the three days she did bravely manage to soldier on. With the lack of power in the Philippines the hospital ventilators were never able to be switched on and provide strong currents of oxygen which the baby desperately needed. Althea and her parents struggle in the hospital can only act as an inspiration to everyone and the bravery shown in such desolate circumstances.

The Eastern Visayas Regional Medical Center was completely flooded by the Philippines Typhoon. The intensive care unit in the hospital for newborns was left in complete ruins and all the machinery to help save lives like the  incubators, were damaged as they were swamped by water and sludge. The storm has been reported to not have been a contributing factor to the baby’s problems and that it was more likely bound to inadequate prenatal care by the 18 year old mother because the baby was not born prematurely.

Whilst Althea was in the hospital it was only provided with candlelight, a small bulb that was hanging in the middle of a room attached to a generator and a few packs of baby nappies. This being said, the hospital and it’s deficiency in essential equipment imbues the predestined fate of any baby born with problems during that period. Regards are sent to all parents as the Philippines hospital sees this Typhoon baby die.