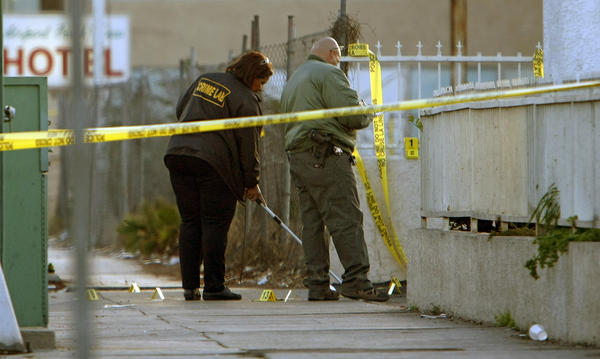 A tense hostage standoff in the Inglewood neighborhood of Los Angeles has come to end, with an officer being shot and the gunman surrendering himself to authorities. The 45 year-old man took his girlfriend and her daughter hostage in a home near the corner of 108th Street and of 5th Avenue in the southwestern area of Los Angeles County, California.

The situation began sometime after noon, when the shooter was seen dragging the teenage daughter outside the home by her hair. A 911 call was placed regarding the domestic dispute. When officers arrived on the scene, the man fired on them from within the dwelling, according to statements released by the Inglewood Police Department.

An officer was struck at least once in the body, but was protected by his ballistic vest. Witnesses state that officers on the scene responded with a barrage of gunfire as another officer was injured as they were rescuing the officer who had been shot. Both officers, veterans of the force with over a decade of service each, were taken to area hospitals for treatment of non-life threatening injuries. News video broadcast on local station KABC-TV shows multiple gunshots being fired as officers engaged the assailant.

Crisis negotiators dealt with the gunman,who barricaded himself and the women inside the house, via loudspeakers as the incredible situation unfolded over the course of several hours. Police evacuated the streets surrounding the dangerous situation, and ordered neighboring residents to stay in their homes for their own safety.

After approximately nine hours holding the hostages inside the house, the as-yet-unidentified man released the women and surrendered to law enforcement on the scene and was taken into custody. Lieutenant Dave Dolson of the Los Angeles County Sheriff’s Department gave a press conference after the successful resolution of the incident.

A neighbor, in a statement given to reporters for the LA Times, said that there were “so many gunshots, it was like you were in a war zone.”

“Sometimes these things just take time,” said Dolson. The ordeal lasted nearly nine hours from the time the officers initially arrived on the scene to the time when the suspect released the hostages and gave himself over to police. Inglewood police have indicated that the suspect would not be identified until after he had completed processing at the local precinct.

The LA-area neighborhood is no stranger to these types of situations. In June of 2012, a similar hostage situation unfolded inside a Burlington Coat Factory retail store in the same neighborhood. In that incident, an attempted robbery went awry and the would-be thieves ended up taking store employees as bargaining chips. SWAT was dispatched to the scene, and within a couple of hours the hostage-taking criminals began releasing the people they were holding. The incident was ultimately resolved without injury to the hostage-takers, those held or law enforcement.

Inglewood, where these hostage situations played themselves out today, and a year ago, is an incorporated city approximately twelve-and-a-half miles from downtown Los Angeles, with a population of just over 100,000 residents.