By John Amaruso on November 18, 2013Comments Off on Illinois Tornado Tosses 80 Year Old Man to His Death (Video) 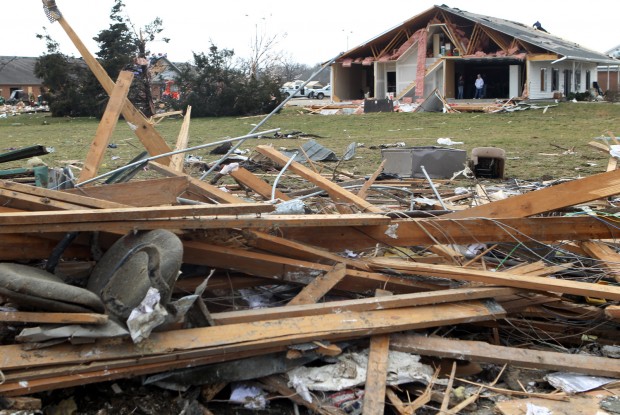 Winds from some of the most violent tornadoes to ever hit the Midwest and Illinois destroyed multiple homes, launching debris and tossing the body of 80 year old Joseph Hoy over 100 yards from his home to his death. He is thought to have tried taken shelter from the tornado when he was caught in the 200 mph winds. Josephy Hoy is among two casualties reported out of Washington County, Illinois, the other, his sister, Frances Hoy, 78, was found under the wreckage of their farmhouse.

Out of the 194 tornado warnings issued in the month of November for the state of Illinois since 1896, 101 of them were issued this past Sunday, a spike in storm patterns unseen in recent history.

Meteorologists concluded that a total of 81 tornadoes ripped through the region, raining down suv-sized debris and hail the size of golfballs.

Tom Skilling, WGN-TV meterologist said that the tornadoes and storm system might go down as the most powerful to hit the midwest in decades. Tom Skilling said that the Illinois November tornado record of this year may be the “most intense” Great Lakes storm of “the past five decades,”

“(Joseph Hoy’s) house was blown away by a tornado,” said Mark Styninger, Washington County coroner and friends of the Hoy family. “They were just very nice people.”

Further north, 190 mph winds leveled the town of Washington, Illinois, home to over 15,000 people. The EF-4 tornado left in its wake chaos and destruction, leaving the National Guard to send in a 10-person firefighting and rescue team. Officials say that 80 people were injured and one reported dead in the Washington disaster.

Mayor Gary Manier of Washington, Illinois said “The devastation is just unbelievable… I can’t imagine people walked away from these places.” Estimates of the total destruction range up to 500 homes decimated by the tornado’s fury.

Three more deaths occurred in Massac County, where some of the worst damage happened in the small town of Brookport. Hundreds of homes were damage while buildings were “smashed into piles of rubble.” A town curfew has been implemented from 6 p.m. to 6 a.m.

Tornadoes ripped their way throughout the state, hitting Grundy County, where an EF-2 tornado with wind speeds of up to 135 mph leveled hundreds of homes. The community of Diamond which surrounded the area was ordered to evacuate following reports of Grundy County’s devastation.

The Hoy families death came as a shock to many in the community who knew the farming family well. The violent manner in Joseph Hoy’s death exemplifies the sheer power and terror that this tornado system rained down on the Midwest.

“You could feel the change in the air,” said Lisa Glisson, resident of Diamond County. “You could hear the wind going over and it just felt heavy, surrounding you.”

Over 19,000 Illinois residents remain without power since the storm. The Illinois Emergency Management Agency is working with state agencies to help bring power and supplies to the affected areas.

The tornado that hit Washington County was reported to have stretched over 3 miles wide.