Israel News: Cheers to a Positive Story From the Wine Region 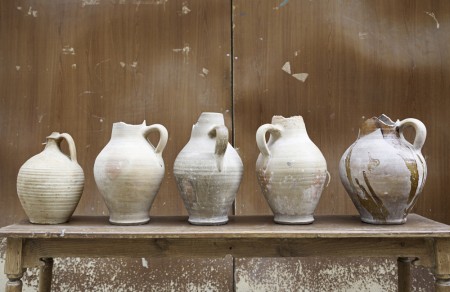 Archaeologists are abuzz over news about one of the world’s oldest wine cellars in the northern city of Tel Kabri, Israel. The massive wine cellar is 3,700 years old and was once home to more than 2,000 liters of wine.

The latest archaeological discovery from Israel was unearthed when American and Israeli teams were digging in an ancient Canaanite palace near Nahariya, Israel.

The cellar dates back to 1,700 BC and is in Israel’s modern day wine region. The ancient Israeli wine had been stored in ceramic jars and it wasn’t just any old table wine. These were luxury wines that were reserved for special occasions.

According to American researcher Andrew Koh from Brandeis University, this wine was definitely not something that people just came home and drank on a typical evening. The top-shelf Israeli uber-vintages were made with mint, honey, cedar, cinnamon bark and tree resin.

The team of archaeologists was led by Koh, Eric Cline of George Washington University and Assaf Yasur-Landau of the University of Haifa in Israel. During the dig this summer in Nahariya, the American-Israeli archaeological dig team found a three-foot-long jug ( later named “Bessie”), then ultimately uncovered another 40 ceramic jars. Each jar was big enough to hold around 60 liters of wine. After the discovery in Israel, news quickly spread as the team ultimately packed a 15 x 25 foot storage room full of the ancient wine jugs.

Koh believes that the jars once held red and white wines, although none is actually left at this point. The researchers are just analyzing the 3,700 year old residue left on the sides of the jars. The liquid may be gone, but the discovery is absolutely unmatched. A wine cellar of this size and age is an extremely rare and important discovery for the worlds of archaeology and wine.

Patrick McGovern from the University of Pennsylvania is an expert in ancient winemaking and is therefore more than a little excited about the news of this discovery from Israel’s ancient wine region. The wine made in the Canaanite region is some of the oldest in the world. It was from this region that winemaking techniques spread into Egypt, then the Mediterranean region, and eventually to the New World.

Boston University archaeologist Curtis Runnels said that the wine was clearly of royal quality. The discovered batch of jars appears to be the wine cellar for the ancient palace in Canaanite. The jars were seemingly all made from the same potter and the wine was of remarkable consistency for such a large batch.

This wasn’t just any palace either. During the Middle Bronze Age, this palace was home to the ruler of the Canaanite Kingdom. In 1,700 BC, Tel Kebri was the capital of the region and so researchers have every reason to believe that this was the wine fueled the once-powerful ruler of the ancient land.

Cheers to the archaeological team for bringing us a bit of uplifting news from Israel and a positive story for the wine region!