John F. Kennedy Visited Japan Once, but Caroline Has Landed There 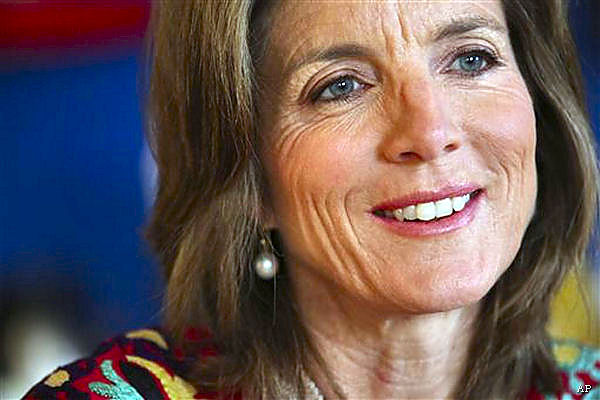 John F. Kennedy visited Japan once in 1951, but did not return there during his three years as President; now that daughter Caroline has landed there, her presence in the country is welcomed. The country greeted Caroline Kennedy as the newly appointed U.S. Ambassador on Friday. The timing of her visit as the only living descendant of the deceased President makes Nov. 22 an even more poignant 50th anniversary of JFK’s assassination.

The Japanese view the Kennedy family as allies. President John F. Kennedy’s youth and charisma back in 1964 charmed the thriving country of Japan, which was eager to produce the Summer Olympic Games.

A glimpse into the historical connections with Japan on this day shows that in January 1964, a team from the White House, including former Secretary of State Dean Rusk, was flying with his team to Tokyo, when news broke of Kennedy’s assassination in Dallas, Texas, on November 22, 1963. The plane immediately reversed its travels over the mid-Pacific region.

The 55-year-old daughter Caroline said how excited she was to carry on her father’s legacy. She said he had only visited Japan once but planned to visit there in the post-war era, and would be proud that his daughter Caroline has landed the position of U.S. Ambassador.

John F. Kennedy first confronted Japan’s “Tokyo Express” destroyer in World War II on August 1, 1943. This collision has been called the most famous small-boat crash in naval history, and was quite the calamity.

Japan’s formidable “Tokyo Express” sunk Kennedy’s ship, the Patrol Torpedo (PT-109).  The destroyer, later identified as the Amagiri, struck Kennedy’s PT-109 in front of the starboard torpedo tube, tearing the starboard off. The impact tossed Kennedy around, but most of the crew went into the water. The young Lieutenant John F. Kennedy directed everyone to safety.  Kennedy swam out and saved engineer Patrick McMahon, since he had been badly burned by exploding fuel, and pulled the injured McMahon with a life-vest strap. The men eventually left the remains of the PT-109 and went to an island three and a half miles away.

When questioned later about how he became a hero, Kennedy responded,

“It was involuntary. They sank my boat.”

Today Japan recounts their admiration of the late President Kennedy, and has reportedly been afraid the United States may not be attentive to the country; Caroline’s celebratory and political stature, along with her diplomatic ties to President Obama, is reassuring to the country.  Her appointment is viewed as a reengagement between the two countries. The Institute of Contemporary Asian Studies at Temple University of Japan has confirmed this information.

The Obama administration is reportedly attempting to stabilize U.S. relations within the Asia-Pacific region.  50,000 U.S. troops are stationed in Japan, and in addition, the impressive U.S. 7th Fleet is located there.

Caroline recalled going to Hiroshima with her uncle, the former Sen. Ted Kennedy, in the latter part of the 1970s.  She enjoyed the visit so much that she went to Kyoto and Nara again in 1986 for a portion of her honeymoon with designer Schlossberg.

Nancy Snow, a visiting professor of mass communications at Keio University at Tokyo, expressed the country’s pride in having Caroline come forward in the footsteps of her late father John F. Kennedy:

“There’s so much mythology about that time, and she’s the sole survivor. It’s almost a passing of the torch.”

Kennedy visited Japan only once to his disappointment, and the country has given daughter Caroline a red-carpet welcome since she landed the position of U.S. Ambassador.

3 Responses to "John F. Kennedy Visited Japan Once, but Caroline Has Landed There"