Justin Bieber Bashed by a Bottle On Stage in Brazil (Video) 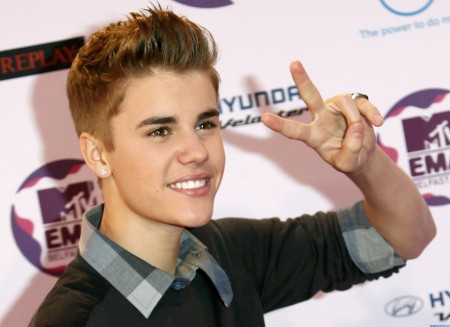 It is easy to see why Justin Bieber has implored his fans to not throw things on stage when he is performing. At the end of an eventful week in Brazil Bieber was bashed by a bottle on stage while singing Boyfriend near the end of his Sao Paulo concert.

It was the perfect end to a week that saw the 19 year-old pop star sneaking out of a brothel; getting caught out with a prostitute and being asked to leave his hotel for disobeying rules. On the bright side, it doesn’t appear that the Canadian singer was injured from the flying bottle just extremely annoyed.

Justin Bieber has gone on record saying that if fans cannot control their urge to throw things at the stage while he is singing, he will walk off and not come back. Which is exactly what he did in Sao Paulo. If looks could kill, Justin’s audience would have been dead so long that they would have started to smell.

Looking at the video, it does not appear to have been on purpose. It is almost a tradition for folks at concerts to sling water filled bottles around the mosh pit. For the audience members who are basically trapped with no way of avoiding dehydration this is a way to get a drink. Because of this, concerts usually have a small number of injuries where the bottle has struck someone in the head or face.

Luckily it looks like Justin was struck on the shoulder as the bottle was beginning its downward trajectory. At first glance it does appear to have launched at Justin on purpose. Certainly Bieber thought so as he stormed off the stage. If not his shoulder, he could have been struck on the hand which was dangerously close to his face as it was holding the microphone. Either way, the projectile was certainly more substantial than some female fan’s underwear.

The fan who uploaded the video, and an article about the incident, reported that the Brazilian fans waited for Bieber to return. It was pointed out that at the performer’s other concerts he usually sings Baby after finishing Boyfriend. The fans at the Sao Paulo concert hung around until the crew began loading equipment from the stage.

At that point the disappointed audience left the area. Earlier in the year, when Justin told his fans that throwing things at the stage while he was singing was unacceptable, there was a good bit of derision from non-Bieber fans and the media.

After getting bashed by the bottle in Brazil Justin must at least feel vindicated. After such an event filled week, the singer must also feel over inundated. It is obvious that the teenage performer has the paparazzi on his heels no matter which country he is in.

The paps were certainly in evidence when Justin Bieber left the local Rio de Janeiro brothel on Friday. At least they were not among the fans at the hotel he was asked to leave. They were also, apparently, not present when the singer was bashed by a bottle on stage during his Brazil concert. It is hoped that this type of incident will not be repeated as performers should not have to fear for their personal safety while singing on stage. The video of Justin getting hit with the bottle is below.