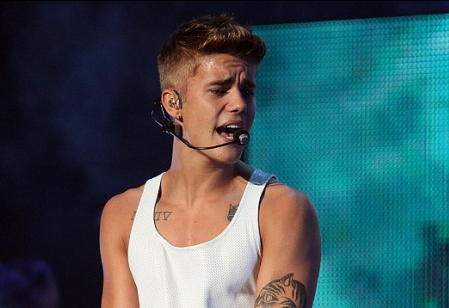 Justin Bieber and his Brazilian antics have certainly garnered the Canadian singer a lot of publicity. His latest round includes a brothel babe who spent the night with the pop star; she says that Justin was delicious. With an alleged price tag of $500 for the performer to spend the night with the “lady” she should say something flattering.

Bieber has been busy walking that fine line between work and pleasure since his arrival south of the border. The 19 year-old popstar was caught out speaking to a professional “lady” earlier in the week and it was this young “lady” that he allegedly spent some “quality” time with. Apparently, the $500 night spent with the professional sex worker went very well, at least, according to her it did.

The “sex worker” operates out of Le Palace nightclub in Panama. She reported that the two of them spent a night of “passion” together. The unidentified woman spoke to critica.com and told them her night with Justin was “delicous.”

Apparently Justin and his “crew” picked up a total of 10 women from the nightclub, it looks like the pop star wanted a smorgasbord to choose from. It also appears that Le Palace nightclub was a bit too far to travel for a second helping of sex for sale.

Later in the week Bieber, with a friend, and his entourage went into the popular Centauros nightclub/brothel in Rio de Janeiro. After spending around three hours in the brothel, Bieber came out shrouded in a blanket, or sheet, but sharp eyed paparazzi spied the singers distinctive tattoo and his recognizable security team.

It was reported that Justin’s November 1 trip to the Centauros brothel concluded with his taking two sex workers “to go.” Neither of these young “ladies” have spoken to any members of the press as yet; something that Justin’s rep must be very happy about. Unlike the Panama professional earlier in the week, these two have kept quiet.

The Panamanian sex worker claimed that she stayed in Bieber’s hotel until “around 5 a.m.” The brothel babe allegedly received $500 as she was the one who “got with him.” It is also claimed that beside the “delicious” treat, all of the 10 sex workers received concert tickets. Justin’s rep denied these claims of the mystery woman and said that she was just one of 30 to 50 folks who had been invited to a rented property which was used for an after-party.

In between Bieber’s alleged “sleep-over” with the woman and his night trip to the Rio de Janeiro brothel, the Canadian pop star was given the boot from his hotel. Rumors of wild drunken parties 24/7 filled publications as well as whispers that property had been damaged. However, some of Justin’s entourage were quick to say that it was the fans who got Bieber ousted from the establishment.

Apparently, the hotel had been under siege by Bieber supporters since he checked in. Justin tweeted to his fans asking them to calm down and to come see him at the concert. Unfortunately, the hotel management decided not to wait for the fans to depart and they requested that Bieber and his crew leave.

Getting kicked out of his hotel has not slowed Justin in taking advantage of the legal sale of sex in Brazil, although he has only, allegedly, done so twice. His entirely legal pursuit at the age of 19 is perfectly understandable, if not a little unsavoury.

On top of all the sexual shenanigans in Brazil, Justin was hit by a bottle during his performance of Boyfriend at Rio. It was near the end of his concert and the pop star was either hit in the face or upper shoulder and he was not amused. Glaring at the audience, he stormed to the back of the stage and did not come back. Disappointed fans waited until roadies began packing up equipment before deciding to leave.

There has also been a video leaked of Justin sleeping on a couch with an unidentified woman looking on. Rumors again ran rife with allegations that the mystery woman was a sex worker, but, that has also been denied. Publications have printed that Bieber was kicked out of his hotel after this footage was leaked, but that is contrary to what had been previously reported.

On top of the “sleeping on the couch” video, footage also appeared of Justin spray painting an enormous “tag” of a somewhat racist nature. A monkey draped with gold bling was the “art” left on a hotel wall in Brazil and detractors of the singer were quick to make racial inferences of the tag.

Other incidents from Bieber’s Brazilian tour include allegations from paparazzi that the singer and his crew threw cobblestones at them when they attempted to take his picture; and media disgust at the singer’s charging $800 per person for a personal “meet and greet” that lasted literally seconds.

Justin Bieber’s behaviour in Brazil has been worse than usual. Despite the brothel babe saying that her night with him was “delicious” he has not done anything to improve his already tarnished image. News continues to pour in about his latest escapades including his alleged attempted theft of a bicycle outside a casino. As long as the teen sensation continues to misbehave, his image will not improve. The brothel worker may find him delicious, but there are quite a few people who think he is anything but.