By Michael Smith on November 3, 2013Comments Off on Justin Bieber in Brazil Badness Bottles and Brothels (Video) 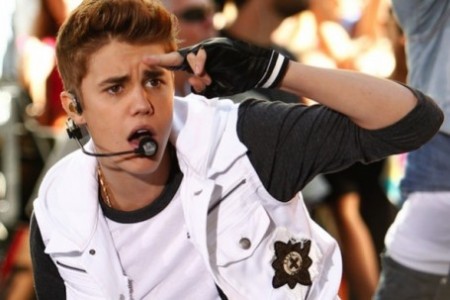 Justin Bieber in Brazil has had one long tour-leg that can be summed up in three words: badness, bottles and brothels. First, the Canadian entertainer was caught sneaking out of a Rio de Janeiro brothel. Somewhat fittingly, Justin was covered with either a blanket, or a sheet depending on which Brazilian paper you read, but with his grey wraparound tattoo peeking out and his ubiquitous bodyguards, it was still obviously him.

Paparazzi had been tipped off about the 20 year-old singer being in the brothel so they camped out to catch him leaving. Bieber’s bodyguards hustled the performer out of the front of the building along with two women who were put into a separate vehicle. Bieber was there with a friend, so apparently the two “ladies” were for their mutual entertainment.

The brothel, well known in Rio, was visited by the singer on Friday November 1. After leaving in two different cars, they all met up at Justin Bieber’s hotel. Not long after arriving, Bieber and his entire entourage went kicked out of the place. While some of the pop star’s fans may be a little shocked by his interaction with prostitutes, it should be pointed out that in Brazil, selling sex is legal.

Running a brothel, however, is not. It could well be that Justin may wind up “doing a Rihanna” and his night out at the popular house of prostitution could result in an arrest of the proprietors. This is not the first time that Bieber has taken advantage of the lax sex laws in South America. He was allegedly with another prostitute earlier in the week and a Brazilian newspaper reported that the pop star paid $500 to spend the night after meeting the woman in a Panama City nightclub.

The Boyfriend singer got kicked out of his hotel, allegedly, for not obeying the rules. this was just after bringing the two “prostitutes” back to his suite. Hotel management, though, say that was not why the teen singer was asked to leave. Apparently, he and his entire entourage spent several days partying; taking drugs; and annoying other guests at the hotel. It seems that the arrival of two prostitutes at the hotel with Justin Bieber was the sex straw that broke the management’s back.

A source close to Bieber and his crew said that the real reason that they were asked to leave was because of the overabundance of fans who had “mobbed” the hotel. The management feared for the safety of the other guests. That takes up two of the three categories of Justin’s Brazil tour, badness equals both partying and brothel, the last one on the list is bottle.

After the Friday trip to the local brothel, and being asked to leave the hotel, the singer went on to perform at São Paulo on Saturday, November 2 when a fan threw a bottle at the stage. It is well known that Justin Bieber has banned fans from throwing things onstage while he is singing. Someone in Brazil missed that particular memo and hit Bieber with the bottle while he was singing Boyfriend.

In Beiber’s concerts he generally moves into Baby after Boyfriend. Not on Saturday; the second he was hit with the bottle, Justin stopped singing and stalked off the stage glowering at the audience. He exited at the back of the stage and was not seen onstage again. Fans apparently waited for him to return, but gave up after seeing the tours roadies packing up equipment.

It is perfectly understandable that Justin Bieber would be mad as hell at being used for target practice for some bottle throwing idiot. The incident was caught on video and uploaded to YouTube. We have included the video below. Bieber fan’s may want to avoid watching this footage. So, in essence, Justin’s Brazil tour could be summed up as: badness, brothels and bottles, but, not necessarily in that order.