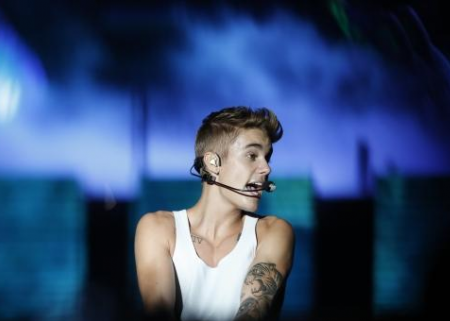 You just cannot slow Justin Bieber down. After the 19 year-old’s hijinks in South America he is taking a brief break and he partied down, in his words, “like some Great Gatsby sh*t, man.” Although it is certain that if Gatsby had thrown the party, his neighbors would not have complained nor would they have called the police. In fact, it is pretty safe to say that Gatsby would not have had neighbors close enough to hear his celebrations.

Sure Justin’s Calabasas crib is over 10,000 square feet and sits on one third of an acre of land, but lets face it, Gatsby’s crib was huge. Bieber’s little bungalow would probably seem small compared to the F. Scott Fitzgerald hero’s gatehouse. Still, the Canadian pop star wanted to let his short hair down by inviting around 100 people to his crib, including his pal Snoop Lion.

TMZ reports that local law enforcement was called to the crib to quiet things down. A next door neighbor, who is rumored to be the same one who dobbed Bieber in for racing up and down Calabasas streets, rang the Los Angeles County Sheriff’s department to complain about the level of noise.

At one in the morning, deputies swung by the familiar address, after all they have been there before, and told the partiers to calm down. In keeping with Bieber’s usual lack of concern about both his neighbors and breaching the peace, the sheriff’s department was called again at around three in the morning. This time it was confirmed to be the same chap who allegedly got spit on by Justin when he complained about the driving habits of the Believe singer.

This time police reported to the disgruntled Calabasas resident that they could smell marijuana wafting from the pop stars home, but, they made no arrests. Apparently the local law enforcement officials asked the party participants to quiet down yet again. Perhaps this was what Justin Bieber meant when he referred later to “Great Gatsby sh*t.”

At 5:30 a.m. the neighbour called the LA County Sheriff once again, this time filing a police report about the noise from Justin’s party. The annoyed resident filed a police report that said Bieber was disturbing the peace. The police will have to send the report over to the Los Angeles County District Attorney. It remains to be seen if the DA will want to prosecute the teenage performer or not. Most likely things will go the same as allegations of Bieber’s speeding through the neighborhood.

To say that Justin Bieber is perhaps not the most popular resident of Calabasas is a bit of an understatement. His neighbors have not been best pleased at his highway speeds up and down the suburb’s streets and his “house-mates” Lil Twist and Lil Za did not elevate Bieber’s status with his fellow Californian suburbian denizens.

Despite how his neighbors may have felt about the cacophony of noise coming from Justin’s house on Friday, the singer had a great time. As he got into his car the day after he told paparazzi that his party was wild, like “some Great Gatsby sh*t.” It is doubtful though that Gatsby would have had marijuana at his parties.