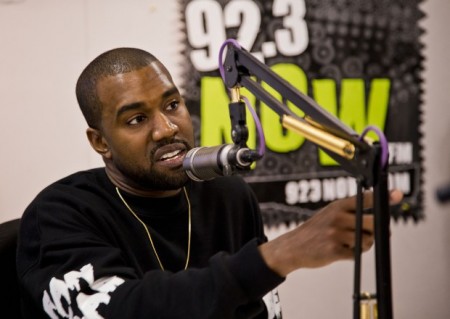 Kanye West, the outspoken and abrasive rapper in an interview with 92.3 Now, suggested that people boycott Louis Vuitton this holiday season, after a less than friendly encounter with heads of the fashion company. Kanye West’s disdain with the high end luxury brand started with his disapproval of the fashion world’s “lack of diversity”, and has culminated into a heated exchange with Louis Vuitton.

In an interview with 92.3 Now on Monday, the hip hop recording artist turned producer, turned entrepreneur, turned fashion designer, chastised the brand after being given the cold shoulder by Louis Vuitton execs in Paris.

Kanye West claims that he had tried setting up a meeting with the head of Louis Vuitton and instead of being greeted like the awesome larger than life celebrity that he is, Louis Vuitton asked the rhetorical question “I don’t understand why we need to meet with you?” Kanye’s response- “Influence.”

Kanye West went on to say that Louis Vuitton underestimates his “power” and that he could single handed take down the fashion company this holiday season.

“Everybody in New York City right now, don’t buy any Louis Vuitton until after January. Now do you wanna meet with me?” Kanye West said live on the radio show. Kanye’s threat to Louis Vuitton is a way to call out the company for their snubbing of the infamous artist.

Kanye West, not one to be shunned, is obviously not very happy with the French based fashion company. Kanye’s latest hypothetical boycott is another outlandish and somewhat feeble attempt at solidifying his self-made larger than life image, a powerhouse capable of driving entire industries with nothing more than his word.

Kanye’s latest venture includes a deal with Adidas, after being regretfully turned away by Nike when the company wasn’t willing to “bend to his conditions”

Nike’s refusal to provide Kanye West with his own design facility and royalties for the conceived “Yeezus” collection they said was not a snub of Kanye West, assuring that those benefits are reserved for professional athletes. Kanye in his all or nothing attitude walked away from the deal, signing with Adidas who agreed to satisfy those terms.

“I said, ‘Well I need royalties.’ It’s not even like I have a joint venture. At least give me some royalties. Michael Jordan has 5 percent and that business is $2 billion. He makes a $100 million dollars a year off of 5 percent royalties. Nike told me, ‘We can’t give you royalties because you’re not a professional athlete.’ I told them, ‘I go to the Garden and play one-on-no one. I’m a performance athlete.’

While Kanye’s claim to “performance athlete” is a new one, you can’t put past Kanye any opportunity to make the headlines. And when it comes to performing, Kanye runs the marathon of attention grabbing performances. Kanye’s latest suggestion to boycott of Louis Vuitton is a testament to this “performance athlete” proclamation, and his endurance in the sport of fashion design haggling.