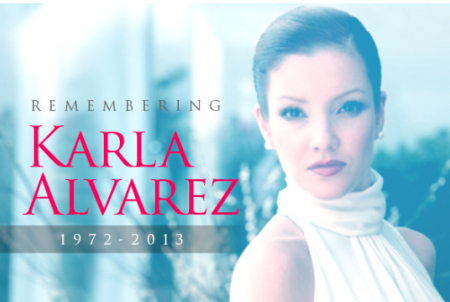 The news of Karla Alvarez and her sudden death has shocked  friends and colleagues who have posted their reactions  to the tragedy on  social networks.  The news of the telenovela star’s death came amid rumors of health problems associated with an eating disorder and problems with alcohol.

One former colleague, Kate del Castillo, took to Instagram to post a picture of Kate and Karla together. The two worked on the 1998 television program La Mentira. The Instagram post was of the two actresses on the set of the show that they both starred in. The caption on the picture said that Kate would “never forget” marvelous moments that the two of them “lived together.” She ended the caption by offering prayers to Karla’s family.

Thalia; queen of telenovelas, also posted on her verified Twitter account: “Sad news with the departure of Mary Karlita Álvarez. Grandes Mercedes.  Oraciones [prayers], memories and light to your familia. Descanse [Rest] in peace.” The actress had worked with Karla in her first telenovela, playing the lead role of Maria Mercedes.

Another colleague from  the program Alma Rebelde, Aracely Arámbula,  tweeted that she was deeply saddened by the news of a “dear colleague”  dying. Aracely ended her tweet by professing her love and “I hug you from here.”

Jorge “El Burro” Van Rankin, host of the television show Hasta Adentro had been in a public relationship with Karla. He posted on his Twitter account after hearing of her death: “Regrettable news! May you rest in peace Karla Álvarez!”

The Latin show business world has been shocked by the death of Karla Alvarez. Friends and colleagues have taken to social media to express their sadness and shock at the popular star’s untimely demise. Jacky Bracamontes had worked with Karla on two different telenovelas and she heard of Karla’s death through Twitter. Two of Jacky’s followers actually tweeted the news to her.

Bracamontes and Alvarez were in Las Tontas No Van Al Cielo and Heridas de Amor together and Jacky tweeted her sadness at the news. She finished by saying that she remembered the actress with great affection and referred to Karla as her “little sister San Llorento.” Another actress who had fond memories of Karla was Chantal Andere who tweeted that she was sorry to learn of Alvarez’s death and she asked that Karla “rest in peace venadito [little deer].

Danna García, the Colombian actress who worked with Álvarez in two telenovelas, also went on to the social network site to voice her reaction to the news. The two worked together on Un Gancho Al Corazón and Karla’s last program Qué Bonito Amor. Danna tweeted that “Karlita” had left, but her happiness remained. She ended by saying that she would love the actress wherever she was.

Colleagues and friends of the telenovela star have been shocked and surprised at the news of her death. Karla Álvarez was a well loved actress, not just by her fans, but by those she worked with. Professional comrades have continued to post their dismay and sense of loss on the micro blogging site. The Latin singer and actress Sherlyn, aka Sherlyn Montserrat González Díaz, posted that Karla had been a good friend and “great co-worker.” The two had worked together on Camaleones.

Karla Alvarez  co-starred with Ingrid Martz on Heridas de Amor and her former co-star posted that she lamented the death of Karla and tweeted that she would pray for her “eternal rest.” Puerto Rican singer Olga Tañón was moved to post her surprise and sadness at the news of Karla’s passing.

The death of Karla Alvarez has shocked her many friends and colleagues and they continue to express their sadness and condolences about the news via social networks.  Alvarez allegedly died from respiratory failure and no news has  been released about funeral arrangements. Tributes to the telenovela star will, no doubt,  continue to pour in from the shocked Latin show business world.