By Rebecca Savastio on November 22, 20132 Comments 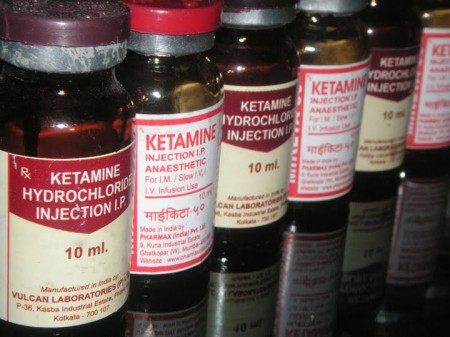 A drug long used for anesthesia for humans and animals has been shown to be quite successful for the treatment of clinical depression, particularly treatment-resistant depression.

Historically, the drug ketamine, has been used for depression in sparse and conservative measures but recently the Mayo Clinic and Yale University have been actively engaged in researching ketamine for depression.

Mayo Clinic psychiatrist Dr. Timothy Lineberry declared; “It’s surprising both that it works and how rapidly it has effects. It sometimes can work in hours to reduce depressive symptoms and suicidal ideations.” In addition, the nine clinics in the USA that are certified for ketamine treatment have revealed positive data.

Psychologist Dr. Ellen Diamond has been treating depression or almost 30 years and stated; “Ketamine works quickly compared with other antidepressants” and “Some people respond within hours. Others take a day or two or even a couple of treatments.”

This opinion is supported by patients and research participants having experienced hallucinations and dreams while under the influence but the low-dose application of intravenous treatment is being refined to minimize such affect.

The effects of ketamine are not surprising as this drug has a long history of street drug abuse and has street names such as “Special K”, Green”, “K” and “PCP”. Some therapists are reluctant to prescribe a drug that has illicit street value particularly if they are not familiar with it.

Another issue for depressives to consider is the patent for ketamine has long expired so no one can legally advertise ketamine as effective for treatment thus keeping the drug a secret. As a result, private depression treatment clinics are charging upwards to $750 for treatment.

Dr. Roger J. Cadieux with Penn State College of Medicine at Hershey, PA. claims 10 to 30 percent of depressives do not respond to selective serotonin reuptake inhibitors (SSRI) and selective norepinephrine reuptake inhibitors (SNRI) or a combination of both. These medications account for the majority of drugs prescribed for depression today.

Two issues with the standard treatment of depression with SSRI’s and SNRI’s are the ingredients serotonin and norepinephrine which are not measurable in a reasonable, clinical manner. Such prescriptions as Cymbalta, Prozac and the like are somewhat of a trial and error process to determine if a depressive truly needs such medications and after several weeks of such therapy, only then is the treatment evaluated.

The other problem comes in when depressives wait until they feel so depressed they have ideation of suicide and SSRI’s and SNRI’s take about two weeks to take effect and even then they may be ineffective so normal anti-depression medications may not be as efficacious as ketamine for intractable depression.

Initially tantalizing mental health clinicians was the 2007 study at the National Institutes of Health (NIH) that established positive results by showing some treatment resistant depressives as improving within hours of infusion with ketamine that previously did not respond to SSRI’s or SNRI’s.

Additionally, ketamine is promising for those that experience late onset post-partum depression where waiting for standard drug and talk therapy may not a good first line treatment. Post-partum depression or ‘baby blues’ strikes 80 percent of women if early onset and 10-16 percent if the depression remains for more than two weeks after birthing.

With a little under 30 percent of Americans having been or currently treated for depression combined the prediction from the World Health Organization (WHO) that by the year 2020, depression will be the world’s leading cause of disability, the expense of these private clinics seem to pale by comparison to the potentiation of depression.

For those severely clinically depressed and those who are resistant to standard treatment, ketamine may an effective measure of relief.