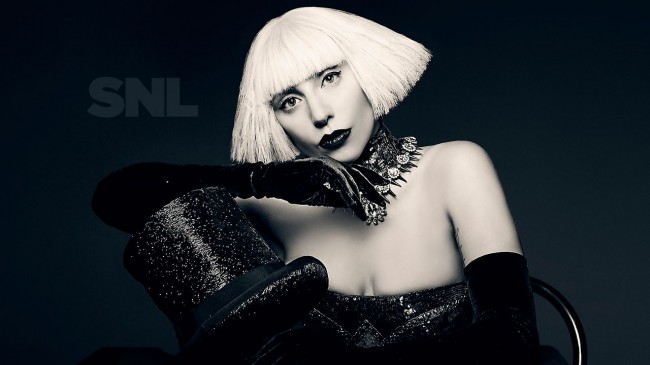 Lady Gaga is the new top-pop contender for sexual stunners as she simulated sex with R. Kelly on Saturday Night Live (SNL). Lady Gaga was the show’s most recent guest host, and took her performance to the extreme as TV viewers sat in stunned reverie.

Lady Gaga was performing her Do What U Want track with soul star R. Kelly when she clearly showed that she really would do exactly what she wanted, despite disgust from some viewers. During her performance Lady Gaga pretended to administer oral sex to R. Kelly before he climbed on top of the pop star. Yet, another antic to add to her list of questionable actions. This should be the one act that strips her of the “Lady”- but plain “Gaga” doesn’t seem to have the same ring to it, even if the name is more applicable.

Gaga has also recently been involved in a controversy surrounding the originality of her songs. Her song Born This Way has been likened to Madonna’s Express Yourself. Gaga turned the tables on this one by poking fun at the allegations with a skit that depicts terrible cover versions.

Madonna had her say during last year’s MDNA tour as she slipped in a snippet of Gaga’s Born This Way during different performances of her original Express Yourself.

Another skit that Gaga had fun with was set in the future during the year 2063. Gaga portrays herself as an elderly “has-been” and attempts to persuade a maintenance man that she was one a hotshot in her heyday. While no direct reference to Madonna was made, the connection is obvious enough.

While most of Lady Gaga’s antics used to shock the system of most people, these days the comments depict boredom. The shock antics are slowly losing their grappling hold over viewers, and one comment reads, “it’s all just a deranged carnival side show these days.”

Lady Gaga had appeared twice on the SNL show before the most recent sexual simulation with soul singer R.Kelly. The most recent appearance was in May 2011 when she was criticized for overdoing her performance. Justin Timberlake was the host of that particular show and Lady Gaga seemed to over perform, hamming it up as much as she could perhaps thinking that it would be funnier. Fortunatley for her, her amateurish antics have been reeled in and her skits on the most recent SNL show (despite the overly sexy performance with R. Kelly) were received with genuine laughs.

Pedrad was gorgeous in a figure hugging white dress.

The two sat comparing their outfits as Pharoah coaxed them on. Lady Gaga was in full force as she poked fun at her own characteristically dramatic outfits saying, “Honestly, I don’t care about fashion, I think people who try too hard with their outfits are maybe hiding something. Like come on, dress like a person.”

Perhaps, Lady Gaga was actually poking fun at some other stars and their sexual desperado antics while she and R. Kelly simulated the sex scenes during her performance, highlighting just how ridiculous and gullible some stars really are.