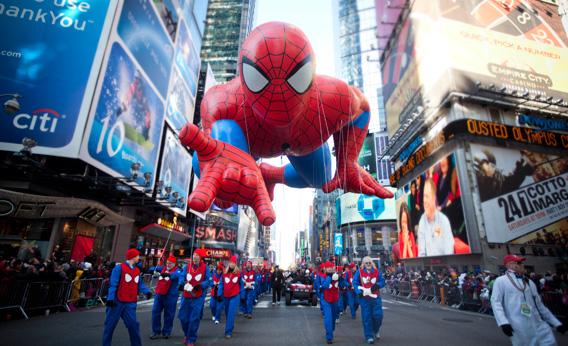 The annual Macy’s Thanksgiving Day Parade could be grounded this Thursday due to uncertain weather forecasts.  The sloppy mix of sleet, rain, snow, and high winds could ground the balloons in the most watched parade of the year.

Winter storm Boreas will be blowing into the tri-state area later Wednesday, bringing with it high winds and below freezing temperatures that could be a threat to such Macy’s Thanksgiving Day Parade favorites as Snoopy, Sponge Bob Squarepants, Spiderman, and Kermit the Frog.

The city rules state that the much-loved balloons won’t be able to fly if winds exceed 23 mph, or if gusts are expected to exceed 34 mph.  The latest forecast from weather.com calls for winds between 15 and 25 mph, with gusts expecting to exceep 35 mph. 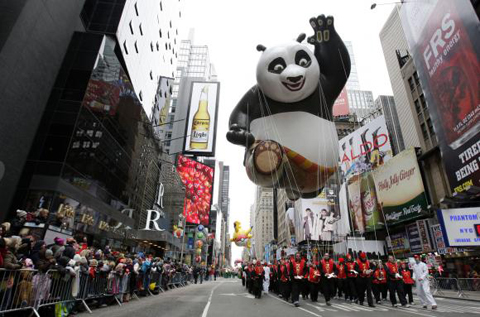 Heavy winds are a flight risk for the oversized balloons, the very trademark of the parade itself.  With the tallest balloon reaching over 5 stories high, the handlers would have more than their hands full trying to keep the balloons in control.  Not to mention the safety threat to the crowds of thousands lined up to watch the balloons float by.  Many spectators have been coming to the parade for years and would be heartbroken if the balloons were grounded.

The Macy’s Thanksgiving Day Parade has a long history of balloon disasters.  The most recent being in 2005, when sustained high winds sent the M&M’s balloons veering off course and straight into a lamppost.  Two spectators were seriously injured.  In 1993 winds were once again the cause when the Sonic the Hedgehog balloon careened into a nearby light post, causing serious damage to the pole but luckily none to the nearby crowd.  The worst accident, however, occurred in 1997.  That was the year that 45 mph winds had the Cat in the Hat balloon float away from its handlers and right into a lamppost.  A piece of metal that was dislodged upon impact was impaled into a woman’s skull and caused life-threatening injuries.  The following year the city came up with the strict regulations regarding the wind.

Bad weather has only grounded the balloons once in the 87 years the Macy’s Thanksgiving Day Parade has made its way through the streets of New York.  That was back in 1971 when strong winds derailed the parade and caused a serious flight risk for the balloons.

A spokesperson for Macy’s says that it’s too early to make any determinations in regards to the balloons.  Macy’s intends to work closely

with the NYPD to determine if they balloons will be able to fly at a lower height.  That decision won’t come until early Thursday morning.

As of right now more than 1,000 volunteers are waiting to begin blowing the balloons up.  Inflating the balloons takes hours, so time is definitely a factor.  Macy’s relies on their employees to assist with the handling of the balloons on the day of the parade.

Hopefully bad weather won’t keep the Macy’s Thanksgiving Day Parade balloons grounded tomorrow.  They are as much a part of the day as the turkey.  But safety is the main concern here.  For now all we can do is wait and hope for the best.

One Response to "Macy’s Thanksgiving Day Parade Balloons Grounded due to Weather?"