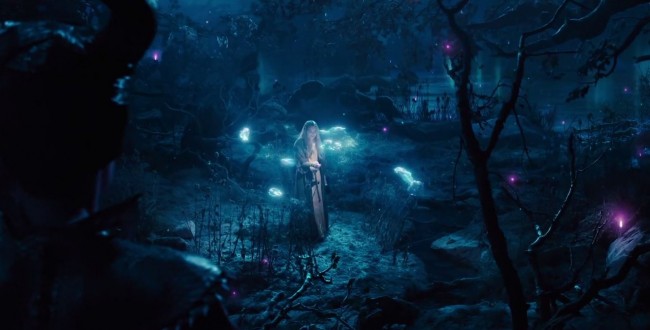 The debut for Walt Disney Pictures’ dark fantasy tale, Maleficent, reveals Angelina Jolie’s sinister side, as she steps up to the mark to play the much-revered villain. Sporting the iconic, black horns, blood-red lipstick and a ghostly white complexion, Jolie is really made to look the part.

The film is slated for release on May 30, 2014, with Director Robert Stromberg taking the helm of the project. Stromberg has previously been involved in a number of high-profile, blockbuster titles, including James Cameron’s Avatar and Tim Burton’s Alice in Wonderland. However, the film marks Stromberg’s first stab as director, whereas he has often served as the production designer on previous projects. Meanwhile, former chairman of Walt Disney Studios and founder of Revolution Studios, Joe Roth took on the responsibility of film producer.

Taking place before the events of Disney’s 1959 animated film, Sleeping Beauty, the live-action movie is set to explore the role of arch villain Maleficent.

During a recent synopsis, Walt Disney Pictures divulged a few scant details of the plot. Maleficent, as a character, starts out as a “beautiful, pure-hearted young woman,” living a peaceful existence in the forest kingdom. Of course, this harmonious setting is not destined to endure, as indicated during a recent press release:

“Maleficent rises to be the land’s fiercest protector, but she ultimately suffers a ruthless betrayal – an act that begins to turn her pure heart to stone. Bent on revenge, Maleficent faces an epic battle with the invading king’s successor and, as a result, places a curse upon his newborn infant Aurora. As the child grows, Maleficent realizes that Aurora holds the key to peace in the kingdom – and perhaps to Maleficent’s true happiness as well.”

When Jolie was interviewed at the Disney D23 Expo, earlier this year, she explained her feelings on joining the “Disney family.” Her face beaming with excitement, she told reporters that she had been a big fan of the company’s work since she was a young child, before going on to discuss the positive and warming impact that their many moral-centric fantasy stories grant to younger audiences.

Jolie also talked about her reaction to being tasked with playing Maleficent:

“… when I got the chance to play her, I was very, very excited, but very nervous… so, I’m a little nervous, but very excited to have an audience – especially this audience – see her for the first time and see how we did…” 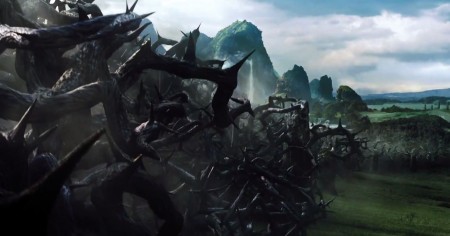 She also talked about how Stromberg’s previous background in design played a major part in shaping the novel aesthetics and feel of the movie. Elaborating on this point, the Wanted actress talks about how – even before the CG special effects were incorporated – the team felt like they were entering an entirely new world.

Indeed, the brief trailer begins with a voiceover from Elle Fanning, who plays Princess Aurora, amidst the idyllic fairytale lands of the enchanted kingdom. As the brief clip progresses, we get a glimpse of a much murkier and mysterious world, in which the sorceress is sworn to protect.

Vivienne Jolie-Pitt also makes her debut on the silver screen, as a much younger version of Princess Aurora, as she darts across a flourishing field on a beautiful summer’s day. Alongside Fanning, Jolie and Jolie-Pitt, Juno Temple and Peter Capaldi also play supporting roles as Thistlewit and King Kinloch, respectively.

In the closing moments of the trailer, a thicket of gnarly, thorn-covered branches violently bursts from the ground, at Maleficent’s behest, setting the ominous tone of the shadowy film.

So, what do you think of the new trailer? Sound off in the comments section, below.