By Rebecca Savastio on November 5, 20132 Comments 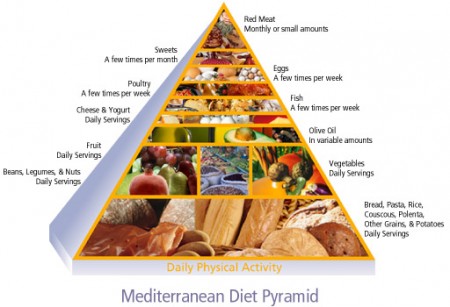 It’s not just a beautiful region of the planet, with windswept vistas, crystal blue oceans and abundant vegetation; the Mediterranean also offers up some of the healthiest cuisine in the world, and now, a new study reveals that eating a Mediterranean diet may lead to a longer life for women. The correlation between a longer life and a Mediterranean diet does not prove nor is it the same as a cause-and-effect relationship, but given the fact that the diet itself is the one considered most healthy by many experts, it might be worth considering the implementation of the diet’s core features. The study has been published in the peer-reviewed journal the Annals of Internal Medicine.

The study was large and widespread. Scientists from the Brigham and Women’s Hospital and the Harvard School of Public Health reviewed the diets of 10,670 women. They found that women who had been eating a Mediterranean diet for most of the past 15 years had a 40% increased chance of living past the age of 70 over women who did not follow the diet. Women eating the diet also showed a reduction in physical problems and cognitive impairment compared with women who did not eat the diet. The women in the study also showed reduced amounts of major diseases, such as hardening of the arteries, high blood pressure, heart disease and diabetes.

The diet is a carbon copy of what we have been told is the best way to eat healthfully: lots of fruits and vegetables; abundant olive oil; extremely limited amounts of red meat; protein sources derived mainly from beans, nuts, whole grains and legumes; and sparse amounts of saturated fats such as the kind found in cookies, cakes, brownies and pies.

The study also confirms previous research. In 2011, a study published in the journal AEG showed a 20% increased chance of having a longer life via eating a Mediterranean diet. Conducted in Sweden, the study included both men and women and spanned a 40 year period. The study participants in the 2011 study were all 70 years of age.

Additional previous studies have shown similar results with regard to health benefits from a Mediterranean diet. While no direct cause and effect has been found as of yet, the growing body of research is beginning to point to an established link between the diet and longer life spans.

A typical breakfast on the diet might include oatmeal, scrambled egg whites sautéed in olive oil, and a cup of mixed organic berries. A typical dinner on this type of diet may consist of a small bowl of whole grain pasta, a four ounce serving of grilled white fish; a large leafy green salad drizzled with olive oil and balsamic vinegar, and fruit for dessert.

A new study says the Mediterranean diet may lead to a longer life for women. Given the results of previous research, it might not be a bad idea for men as well as women to consider adjusting their eating habits to reflect Mediterranean eating principles.