Mexico Celebrates Day of the Dead

By Kimberly Ruble on November 2, 2013Comments Off on Mexico Celebrates Day of the Dead 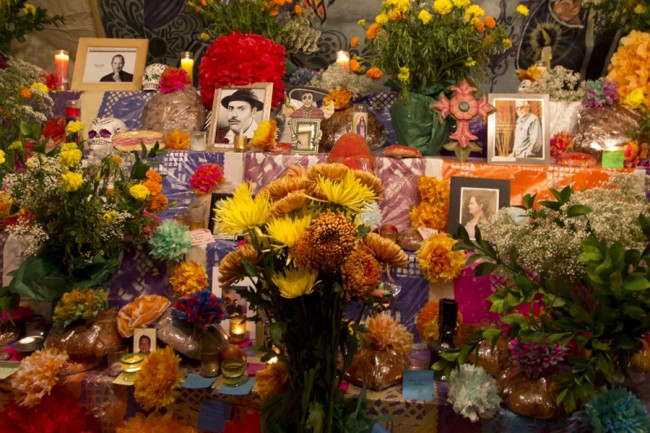 It is that time of year again when Mexico celebrates their national holiday known as the Day of the Dead. Sadly, however, numerous Mexican-Americans do not even rejoice on Nov.2 because they cannot easily find a lot of the elements that make up the holiday rituals.

She has lived in the United States for 20 years and she has not celebrated the holiday since before then, stated Nancy Alvarez, who is a Mexican-American. The Day of the Dead is a big event in Mexico and she misses celebrating it very much.

Goosebumps came up on her arms as she talked about the holiday. Her grandfather, who is buried in Mexico, was born on Nov. 2, but for various reasons she is unable to honor him in a traditional Mexican way. Everyone is off work on that date. A person cannot do that in this country, she added.

Although there are parts of the special day that have journeyed well with Mexican-Americans to the United States, such as skeleton-decorated candles and sugar skulls, there are various fundamentals of the holiday which are hard or impossible to recreate.

The holiday itself might be called Day of the Dad, but the festivity, and remember that it most definitely is a happy party to recall departed loved ones. It is major contrast against the serious All Souls Day which it shares the date with.

Most newly arrived and even first-generation Mexican-Americans decide to have their bodies transported back to Mexico for burial so that makes an old-style cemetery visit impossible for family members left behind.

When families go to the cemeteries, one of the first things they proceed to do after cleaning is to put out Day of the Dead flowers. The blooms are known in Spanish as cempasúchil or in English as the common marigold. The smell of these flowers is believed to help lead the deceased back to earth and help aid in contact with their loved ones.

Marigolds in particular are picked because they held a vital meaning in Aztec beliefs. They are alleged to have had medicinal, magical and spiritual powers. Sometimes they are sprinkled around, others they are made into complex arrangements.

Decorations also often begin with candles that have skeletons or religious icons. Candles are useful since families often stay the night at their loved one’s grave site. This is an activity which would not usually be permitted at an American cemetery.

Cecilia Humphrey, who is the director of the Mexican Cultural Center in Philadelphia, stated that some other Latin American countries have a holiday that is similar to Mexico’s on Nov. 2, but not one of them is as extravagant as they are in Mexico.

She added the tradition is not as sturdy in a few of Mexico’s states as it is in others, with Day of the Dead enjoyed most enthusiastically in the southern and central areas where Aztec impact is still the strongest. Specifics of the celebration fluctuate by state and even by city, too.

For Mexicans, they believe death is something that is good, not bad. They explain that dying is like waking up. They do not fear it. For the most part they embrace the concept.

If someone in the United States wants to celebrate Dad of the Day. The basic concept is started out by building an altar which is decorated with flowers, candles and a framed photograph of any deceased loved ones. Be sure to put reminders of the loved ones out and also serve food and drink they happened to enjoy. Feel free to talk about and tell stories about the loved ones as people are centered near the altar. Allow young members of the family to introduce themselves.  Leave out some salt and burn incense called copal.

If possible, go visit the loved ones grave sites. Clean them up and then decorate with flowers or candy. Toys are good for deceased children and alcohol for adults. Put out some pillows and blankets back at home. This is for the belief that the departed will be able to rest after their trip to visit to come back to this plane of existence. Most of all have an enjoyable experience. If one could follow the beliefs of Mexico and celebrate the Day of the Dead, it might be a very exciting time.