By Roanne FitzGibbon on November 9, 2013Comments Off on Miss Universe Contestant to Compete Despite Philippines Typhoon [Video] 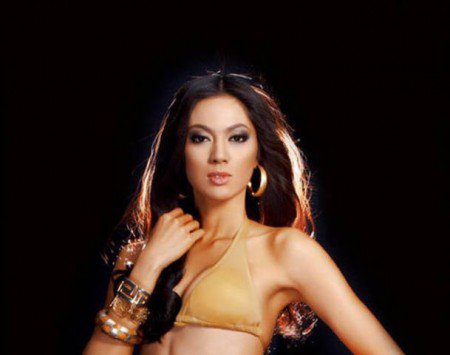 Miss Universe contestant from the Philippines, is set to compete despite the ongoing typhoon in her country.  Ariella Arida has already been in the limelight as a favorite for the event and has been preparing to win.  As typhoon Haiyan touched ground in recent days, Ariella has remained calm and focused on her task at hand.  The beauty from Laguna, Philippines has much on her mind as she wishes her homeland people well and encourages them to stay safe.

The preliminary rounds have been quite favorable for the confident and determined chemistry major.  She stands out in the crowd with an uplifting message of hope for her kinsmen of her native land.  Ariella, an avid runner, is fit and is full of ambition.  She even has dreams of producing her own line of organic perfumes, someday.  She has already represented her country well in interviews and fashion, amongst the array of other glamorous gals from around the globe.  Safe and sound in Moscow, Russia, the contest’s location, Ariella Arida is a strong candidate for winning Miss Universe 2013.

Typhoon Haiyan hit The Philippines Islands this week, with terrifying winds and walls of water, leaving a path of death and destruction throughout the country.  The death count has been estimated at over 1000 and continues to rise.  The small country located east of Vietnam and Thailand , is located in the western Pacific ocean.  It has had a history of typhoons and recently suffered through an earthquake of 7.1 magnitude.  Despite the outcome of natural disasters, life goes on in various ways as the people recover and rebuild.

Miss Universe is a happy event focusing on beauty, intellect and the opportunity to address many issues around the world.  Contestants have a platform to voice their outlook on life despite any strife that may be present in their own country.  Many contestants, including Miss Philippines Ariella Arida, have seen natural disasters, wars and economic upheaval over the years.  Their will to rise above the destruction and celebrate life is a motivating sense of unity.

As sadness and uncertainty cloud the landscape of the world, we need a form of joy and happiness.  The Miss Universe Contest brings nations and people groups together somewhat like a small delegation from the United Nations.  The beauty of life is exhibited and renewed in a small way with healthy competition.

Miss Philippines is not ignoring her country as she competes.  There is not much she could do if she were home, as the forces of nature continue to reign.  By competing and possibly winning, whoever goes home with the Miss Universe crown will have a better understanding for the world and more ability and access to help their own country.

Communication may be limited and flights could be canceled due to the typhoon in The Philippines, but the supporting fans of Ariella Arida will continue to cheer.  Each contestant may be criticized for the lack of compassion in hopes of winning a beauty contest, but the victory surely will be welcomed for any deserving girl by their own homeland.

The world keeps on spinning with weather out of control, wars, famines and unrest.  The hope of happiness can provide a platform of giving back to the people in future ways untold.  Miss Universe contestant Ariella Arida will surely be a strong ray of hope when the winds of Haiyan subside.  Despite the typhoon, she will go on and represent her country with pride and ambition to help in the recovery and rebuilding of her homeland.

The Miss Universe Pageant will be televised on NBC, November 9 at 9:00 EST.