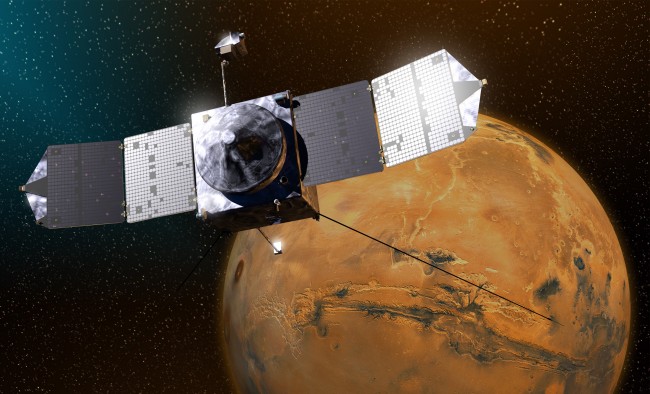 NASA plans to deploy its MAVEN spacecraft to explore the atmosphere of the illustrious Red Planet and answer a mystery that has long puzzled astronomers: if Mars, at one time, had a much thicker atmosphere and a surface replete with flowing water, what caused the planet’s surface to alter so radically?

The Mars Atmosphere and Volatile Evolution (MAVEN) spacecraft is looking set to provide some insight into the afore-mentioned question. With its launch date from Cape Canaveral Air Force Station set for Nov. 18, atop a United Launch Alliance Atlas V rocket, the satellite aims to exclusively investigate the upper reaches of Mars’ atmosphere.

Bruce Jakosky, the MAVEN mission’s principal investigator, based at the Laboratory for Atmospheric and Space Physics (LASP) shared his thoughts during a Sept. 26 press event. After working on the project for around a decade, he explained his excitement that the spacecraft was finally nearing launch.

How Did Mars’ Climate Change?

Over the years, NASA has attempted to identify traces of water on the planet’s surface, dispatching rovers, landers and orbiters in pursuit of this objective. Previous studies have suggested the planet to have been historically gorged with an abundance of water, with observations indicating the existence of rivers and seas, some 3.5 billion years ago. It is conjectured that Mars even had oceans that were half-a-kilometer deep.

To sustain this volume of water, it is believed Mars would have required a greenhouse blanket comprising of a carbon dioxide atmosphere, in the region of 1000 times the thickness of Earth’s current atmosphere.

Dave Brain from the University of California, Berkley, indicates that both the water source and carbon dioxide atmosphere either “… went up or they went down.” When Brain says “down,” he is referring to the subsurface of the planet; Mars is known to harbor sources of water that are frozen deep underground, whereas carbon dioxide is known to exist within the polar ice caps. In contrast, other prominent astronomers believe that the sun may have played an important role in causing the gas from the Red Planet’s upper atmosphere to gradually escape.

Another theory posits that ions are lost from the atmosphere. As a consequence of either the highly intense rays emitted from the sun, or some form of collision, it is possible that the gas molecules within the upper atmosphere could have become ionized. These ionized particles may then become vulnerable to magnetic and electric fields and swept out into space by solar winds.

The current rate of loss of the Martian atmosphere is approximated to be around 100 tons per day; however, this estimate is considered to be unreliable, as it is based upon incomplete data. It’s thought that MAVEN could provide a more accurate picture of the state of the atmosphere, from long ago.

Michael Combi, of the University of Michigan, is currently developing models of the outer envelope of Mars’ atmosphere – the region from which researchers believe particles are being “sucked” into space. He explains the implications of MAVEN’s voyage, the results of which can be used by NASA’s Mars Fundamental Research program. Combi believes the results could improve 3-dimensional simulations that might help researchers better appreciate the intricacies of atmospheric loss:

“The more we know about the loss rate now, the better we can extrapolate back in time when Mars was presumably warmer and wetter.”

The craft is expected to arrive at its destination on Sept. 22, 2014. MAVEN will make an elliptical orbit, ranging from as low as 93 miles above the planet’s surface, to a maximum height of just over 3,700 miles. It will also make a total of five “deep dips,” whilst in orbit, almost scraping the planet’s surface at an altitude of 77 miles.

MAVEN offers a total of three different instrument suites, capable of assessing the properties of Mars’ upper atmosphere and ionosphere. One of these instrument arrays, called the Particles and Field Package (P&F), was constructed by the University of California, Berkeley Space Sciences Laboratory. P&F houses six separate instruments that inspect characteristics of the solar wind and ionosphere of the Red Planet, alongside the role of magnetic fields on upper atmosphere.

Meanwhile, the Remote Sensing Package, manufactured by the University of Colorado Laboratory for Atmospheric and Space Physics, boasts an Imaging Ultraviolet Spectrometer (IUVS) device. The IUVS monitors global characteristics of both the ionosphere and upper atmosphere, and will provide data on the rate at which hydrogen atoms escape. Finally, a Neutral Gas and Ion Mass Spectrometer, designed and constructed by NASA’s Goddard Space Flight Center, will assess structure changes around the planet and send back additional data about the upper atmosphere.

In processing MAVEN, the latest 17-day government shutdown presented quite significant challenges and impeded crucial prelaunch protocols. Fortunately, the mission has not been as ill-fated as other projects, since the team were already ahead of schedule, prior to the infamous standoff commencing on Capitol Hill.

During a recent press statement, NASA Launch Director Omar Baez discussed the unprecedented nature of the shutdown and the space agency’s ability to overcome the challenges that it presented:

“It’s kind of like a hurricane… We have hurricane plans, but we don’t have a government shutdown plan. So that’s a hurdle. We overcame it, we’re moving forward, and we’re ready to hit the beginning of the window.”

In the meantime, NASA has released a CG video that depicts the possible evolution of Mars’ surface over the previous four billion years.