By Roanne FitzGibbon on November 30, 2013Comments Off on OSU Vs. Michigan Ongoing Football Rivalry UPDATE 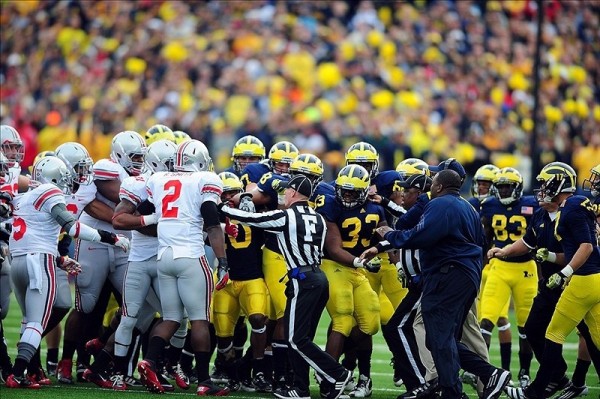 OSU Vs. Michigan is an ongoing rivalry between two college football teams at their best.  It is The Big Game, all set for fans, festivities and fancy food.  Traditionally occurring on the Saturday before or after Thanksgiving, The Big Game always tops off the TV line-up for the weekend.  Fans that do not travel from home, will be glued to the TV for the most awaited game of the season, as other die-hard fans will bundle up against the cold and brave the feud in person.

The football rivalry between The Ohio State University and The University of Michigan is undeniable.  It is a trait bestowed upon generations within the borders of the two states.  The intense rivalry is a win or lose to all concerned and a much anticipated event.  Usually televised because of the history between the two schools, it always makes for good fellowship of fans amongst the young and very old.  It has been around for over half a century when it really became an intense battle, but actually dates back into the late 1800’s.

Just like opposites attract and people are likeminded, the two schools somehow developed a kindred hatred towards one another in the realm of football.  The love-hate relationship exists with undefinable, unique traditions that have spanned a century.  No one really knows what started the ongoing feud, much like the Hatfield and the McCoy tribulation, but in the end there seems to be a bond of unity one does not want to admit.  They depend on each other in the scheme of things concerning the Big Ten Conference rankings, the commentary and the polls.  Football is more than a sport to watch, it is a commodity to be betted on as well as a door into the crowd.   In a strange way of love and respect, the two teams have learned a system of agreeing to disagree, despite the seemingly detestable actions towards one another.

The football teams themselves are much more advanced than the fans that resort to rioting and attacking opposing jersey wearers.   The sad affairs after game days are sometimes tragic and criminal in the name of team spirit.  All in the name of the team they say, as houses and cars are set on fire upon the final outcome score with the opposing team.  Football is almost a cult religion, indoctrinating their young to hate to the opposing team at all costs.  OSU dads and moms teach their kids to hate Michigan, and the same is true from the other side.

“We Don’t give a d*** about the whole state of Michigan….. We’re from Ohio…..”  Sung with pride and commitment, Buckeyes are not afraid to denounce the state up north.  So they say, teaching their youth to hate and detest people they have never met, just because of football?  The young Buckeyes from Ohio learn to hate the Wolverines from Michigan, from birth and in younger years, and vice versa.  Despite hoopla, hype and possible heart attacks from the frenzy, pep rallies and parties, the game proceeds and the much awaited encounter goes on each year.  The old time Woody Hayes vs. Bo Schembechler dual has long been established.  Other coaches and teams can never back down from the tradition.  It is just the way it is.

A most surprising and welcome gift back in the 30’s, was the tribute of the Michigan performing Script Ohio.  They invented the formation, which was quickly adopted by OSU without any strings attached.  The love-hate relationship is evident beyond some of the usual boundries.  It has become an endearing tradition of all OSU fans to watch the OSU Marching Band perform the beloved formation.  Over the years, rivalry and tradition have seemed to blend in unexpected moments of memories amongst the diehard fans on either side.

The 2013 match-up proved to be an intense battle with emotions soaring out of control.  Players from both sides got into an altercation which included kicking and swinging of fists.  It was broken up without serious injuries, except for pride and anger amongst all.   Three players were ejected for the remainder of the game, two from Ohio State and one from Michigan.  The back and forth touchdowns kept the score neck and score the entire game.  With only minutes to go, the game looked like it was about to go into overtime.  In the end, Ohio State was the victor when Michigan failed a two point conversion attempt.  The final score stood at OSU 42, Michigan 41.