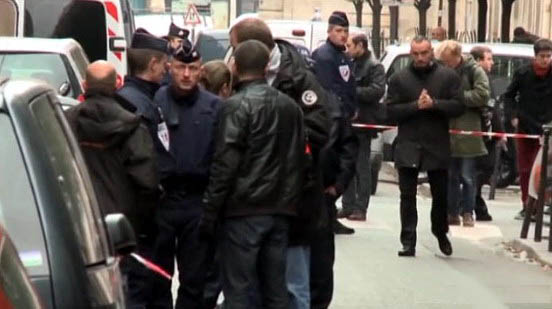 A 27-year-old assistant photographer visiting the offices of left wing daily newspaper Libération in Paris was severely injured Monday when a gunman burst into the offices and opened fire.  The photographer was there for a photo shoot for Next magazine and was severely injured in the back and thorax.  No one else was injured in the shooting incident.

The incident occurred at Libération’s Paris office at 11 rue Béranger in the city’s 3rd arrondissement. A journalist for the newspaper, Quentin Descamps, sent a tweet at 10.29 a.m. local time that a gunman had burst in and that two or three shots were fired in their offices before the man fled on foot. The shooter was described as being approximately 40 years old with cropped hair, of medium height and was reportedly wearing a long green coat, and possibly a bullet-proof vest underneath it.

Latest media reports state that a big  manhunt is now ongoing for the man in the area surrounding the Champs-Elysées.  It is believed that he was carrying a sawn-off shotgun and also possibly a black sports bag containing grenades.

Fabrice Rousselot,  Libération’s editorial manager, told BFM TV that the shooter walked into the offices, fired the gun twice and then left. He added that he is outraged that individual people can go after the press. Rousselot also said that it was fortunate that only one person was severely injured in the shooting at the left wing daily newspaper. Libération’s editor, Demorand Nicolas, speaking to the press at their Paris headquarters, said that they were horrified by the tragedy.  He stated that in a democracy, it is a very serious problem when a person can enter a newspaper office with a gun, whatever the mental state is of that person. He added “If newspapers and media have become bunkers, there is something is wrong in our society.”

The shooting at Libération comes three days after a similar attack at BFM TV’s  offices in Paris, where a man entered the building with a gun and threatened both staff and journalists before fleeing.  Fortunately no one was injured in the incident. A separate incident was reported just after midday in which a man apparently opened fire outside the  Societe Generale bank in the  La Défense  business district of Paris.

No injuries were reported on the scene, but a witness, Francisco Alvarez, told the media that he saw a guy wearing a cap who had a pump-action shotgun in his hand.  He said that the man shot generally in the air, and then through a window and following this, he ran away down the street.

No clear link has been established between the incidents, although LCI in France is saying that it was the same cartridges.  All major news outlets in Paris have now been placed under police protection in case more shooting incidents may occur.

While the shooting incidents in Paris – including at the left wing daily newspaper, leaving one person severely injured – are possibly related, so far there has been no clear motive for the attack which has severely  injured one person.