By Jennifer Pfalz on November 20, 2013Comments Off on Rob Ford Deserted by Staff 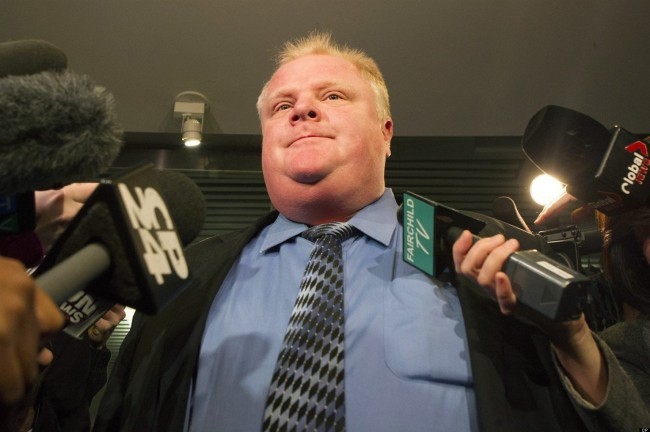 Rob Ford suffered another blow to his hopes of retaining his Toronto mayoral post when his most experienced staff members deserted him in order to join the team of Deputy Mayor Norm Kelly.  The mass exodus occurred on Tuesday and drained the mayor’s office of its most politically savvy staffers, among them chief of staff Earl Provost, deputy chief of staff Sunny Petrujkic and policy director Sheila Paxton.

The move occurred as Ford repeated his vow to go to “war” against his opposition and after the Toronto city council on Monday voted to cut the mayor’s office budget.  The 37 to 5 vote effectively stripped the mayor of any ability to pay his 20 office workers.  Staff inside the mayor’s office were seen packing their belongings, and Ford was restricted from the staff member’s area.  According to Kelly, “The locks have been changed, security has been changed, everything’s been changed.  Everything is going to go forward.”

The decision to resign their positions on Ford’s team was the decision of the individuals themselves, but with Ford’s powers and budget slashed, there remained no reason for the majority of them to remain on his staff.  Although the sides were still negotiating Tuesday evening, approximately 50% of Ford’s team had already sided with Kelly.  Among them, notably, was the staffer most recently hired, whose interview was conducted the very day that Ford went public with his admission of smoking crack.

According to Kelly, attempts to notify Ford of the changes to his staff were made before the mayor returned to his office on Tuesday afternoon in the hopes that the empty desks would not come as a surprise.  “Every effort was made to make sure that he had not only enough people but the people with the requisite skills to look after his office.”

Although Kelly had voted for Ford to lose his powers, he insists that there is no ill will between the mayor and himself, adding that loyalty to Toronto and its citizens comes before any personal political loyalty.

It seems that Rob Ford will be hard-pressed to find any remaining loyalty among his staff, the majority of which have deserted him.  Police reports made public last week described a mayor who tended to “bark” at his team members.  Ford himself has promised lawsuits against the former workers who accused Ford of abusing his staffers, drinking on the job, drunk driving and entertaining a prostitute in city hall.  Brooks Barnett, the policy adviser under Ford, who had served on the mayor’s team from the beginning of his term, left his post on Nov. 6, leaving only three staff members who had been  with Rob Ford from the start.

In the midst of the chaos surrounding his mayoral position, Rob Ford and his brother have been participating in an all-out media blitz.  Over the past day, they appeared as the subject of a two-part AC360 show on CNN, on CBC with Peter Mansbridge, on the Today Show and on Fox News, not to mention on his own show that aired on Sun News Network.  That show has been canceled after its inaugural episode last night.

Toronto’s citizens are starting to demand an end to the controversy as well.  Just today, a website  was created to identify claimants to participate in a class-action lawsuit against Rob Ford, claiming that he has acted negligently and has been derelict in his mayoral duties.  According to the website, the lawsuit is asking for damages of $5.2 million and will include Toronto’s citizens and businesses.

In addition, although Ford has said that he hasn’t smoked crack in over a year, newly released police documents reveal that the infamous video showing Rob Ford smoking crack cocaine was filmed in February of 2013.

As for the city council members, they seemed very content to return to the more mundane aspects of their jobs.  “I think all members of council are quite happy to get back to the regular business of community council,” said Councillor Denzil Minnan-Wong. “It’s really refreshing after all the controversy that’s taken place at city hall, and the circus that’s taken place in the last 10 weeks.”

Ford has filled the newly vacated chief of staff with Dan Jacobs, who produced the mayor’s recently canceled radio show.  He is one of nine staff members to remain in the mayor’s office.  In his first interview as chief of staff on Wednesday morning, Jacobs stressed that Rob Ford was still “an active member of council.”  When asked if the fact that he has been deserted by his staff and that his powers have been greatly reduced left Rob Ford unable to claim his office, he said, “He is still the mayor of Toronto, that’s all there is to it.”

By Jennifer Pfalz
The Globe and Mail