As reports come in, regarding the scandalous trial of Alec Baldwin and his alleged stalker Genevieve Sabourin, Sabourin recounts her love story with Alec Baldwin, one must sense that there is some truth to Sabourin’s testimony. Perhaps this feeling is so by virtue of personally relating to similar events in our own lives.  And, that, at one time or other, we have gotten involved in torrid love relationships that maybe ended as quickly as they began, with the lover dumping us without rhyme or reason and leaving us with a sense of things unresolved. It really isn’t difficult to sympathize with the jilted 41-year-old French-Canadian actress, Genevieve, who, at one time, did have a certain amount of connection to the actor Baldwin before this relation turned “nightmarish.”

Baldwin himself said that his old friend, producer Martin Bregman, introduced them to each other in 2002 in Montreal over lunch. He stated that Genevieve and he (Baldwin) worked together in the 2002 film The Adventures of Pluto Nash. Baldwin admitted that he and Sabourin had dinner together in 2010, supposedly to give her advice on her career. Since that dinner, things then got very quiet about this peculiar relationship, for a little while, at least until as recent as 2012, when all hell seemed to have broken loose. It appears now that some measure of hanky-panky likely was going on behind the scenes! When Sabourin proved relentless in blaring to the world that she and Baldwin had a sexual relationship, Baldwin jumped to foil it with allegations of stalking and harassment, and his friend Marty Bregman unreservedly told the press that Baldwin was involved in the extramarital affair and lying about it! Bregman had stated to the press that Baldwin was dating two women, his present wife and the gal on trial.  Bregman further alleged that Baldwin made up the report to evade his romantic involvement with Sabourin. Still, add those years up and we are looking at a decade-long association between the actor Alec Baldwin and the aspiring actress, Genevieve Sabourin, and not at some “fly-by-night” encounter with a stranger with no history behind them.

Granted, Genevieve’s reaction to Alec Baldwin’s dismissal of her proved nothing short of deranged, explosive, and very compromising of one’s current and future view of her. Sabourin definitely went overboard in trying to remind the actor, and convince the world, that she and Alec Baldwin had a sexual relationship. Even if all she meant to gain was “closure” to a love affair gone sour. Sabourin will go down in history with the stigma “Alleged Stalker of Actor Alec Baldwin” forever attached to her.

As it is, as Sabourin recounts her love story with Alec Baldwin, some of the emails she sent to Baldwin gives one the impression that Sabourin isn’t quite all that mentally stable. 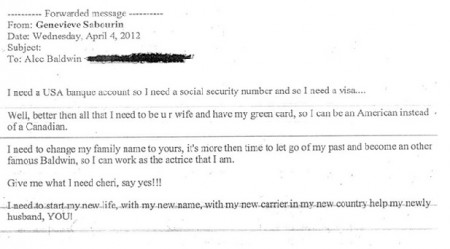 Moreover, this particular email even makes it seem that the attractive blonde was chasing after the actor Baldwin, but to obtain “Green Card” status in this country through marriage to him. Only they know what led up to this woman openly discussing that taboo matter in an email that makes it seem Sabourin trusted Baldwin enough to write those private things to him. Nevertheless, as Sabourin recounts her love story with Alec Baldwin, New York Times reports that according to Sabourin, her affair with Baldwin began in February 2010. Sabourin stated that the actor joined her on a daylong romantic date around New York City. For months thereafter, they penned letters to each other that gave her the impression that Baldwin had “genuine feelings” for her and that they corresponded a lot by phone, which had led to their joining in the city. According to sources, Sabourin claimed that they had spent a weekend together and that it began with a ride through Central Park. Then, that Baldwin took her to see a Broadway play and afterwards that they went to Elio’s Restaurant to share a warm meal. Sabourin then claimed that at the end of the night, they went to the Lowell Hotel and the two had sexual intercourse. “It was a beautiful, romantic evening,” Sabourin testified.

It appears that Baldwin was single in 2010, maybe dating casually or simply focused on his career and the bitter custody battle over his daughter, Ireland Baldwin, since his divorce from Kim Basinger in 2002; the same year that Baldwin claims Martin Bregman introduced him to Sabourin.  So it isn’t as if their “business dinner” –or even as if the alleged romantic date around the Big Apple with Sabourin– was anything so off-limits that it would call for so much drama today. In 2010, Baldwin was single; he owed no one an explanation! Unless it is true that the actor indeed romanced Genevieve so profoundly that he mesmerized her and then realized that she didn’t quite cut it as a long-term partner for him and dropped the closeness. That’s understandable if he hadn’t yet met Hilaria and just as understandable for the jilted Sabourin, too, who, abandoned apparently without rhyme or reason and head-over-heels in love with Baldwin, expects an explanation and probably even earned the right to have one. 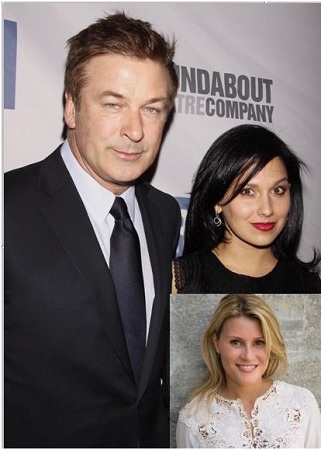 Regarding the emails, sources say that Baldwin claims to have given up on responding to them (so he was corresponding with her, as she alleges).  He claims to have given up responding to them when Sabourin replaced talking about her career with talks of marrying him instead. Also, supposedly, for two years (2010-2012) Sabourin became obsessive and began harassing Baldwin online and begging him to marry her. When she was getting no response things then escalated to the degree to what we have heard lately.

Other sources say that Baldwin began dating the stunning Hilaria Thomas, 29, in the summer of 2011. This closely coincides with the time frame of the “business dinner” he had with Sabourin, as well as with Mr. Bregman’s statement to the press that Baldwin was involved romantically with both women.  Baldwin and Miss Thomas became engaged in April 2012, while Sabourin kept contacting him via email and phone calls, as well as in person, by showing up at his homes, uninvited.  In spite of Sabourin’s attempts to obtain one-on-one closure with Baldwin, the engaged couple married on June 30, 2012 and Baldwin followed through with the allegations that Sabourin was stalking and harassing him. Indeed, it appears that the 55-year-old actor, man of the world next to these two junior beauties, moves quickly and played the field quite sharply with the younger ones which seems more like daughters than gals old enough and wise enough to outsmart him.

With everything that has happened recently within this love triangle, a thoughtful mind cannot help but to wonder if all three parties in this picture agree that Alec Baldwin has a “scar” on the hip, as shouted Sabourin during her trial and then pointed to her hip to indicate just where his is located. And, if so, that the scar exists, then what of the darling Mrs. Baldwin, whose husband denied having sex with Sabourin? As Sabourin recounts her love story with Alec Baldwin, the scar, if there, would forever be a reminder of the sexual affair the alleged stalker screamed about in court, in public, to the press, and to the world.

Moreover, it isn’t as if it is any secret that Alec Baldwin is further famous for his bad temper; one needs only Google those keywords with his name attached and a slew of such instances show up for the asking. What then of this marriage, and the wife and new baby Carmen in it, should Hilaria estimate the damage done; by, say, all the lying and twisting of the facts surrounding her husband and decides that she wants out? Would she be safe and free to go, or would it later turn out as vicious and harsh for her, as it went for Sabourin?