By Iftikhar Tariq Khanzada on November 16, 2013Comments Off on Sachin Tendulkar Retires From International Cricket 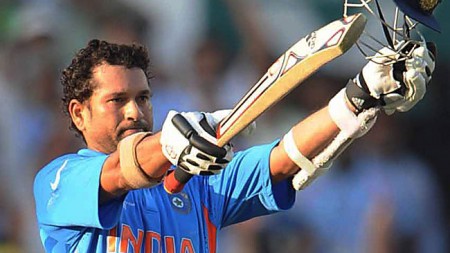 Popularly referred to as the god of Indian cricket Sachin Tendulkar announced his retirement after playing in a record 200 Test matches on Friday. With this announcement an illustrious career comes to end. Tendulkar received his test cap against the arch rivals Pakistan at the age of 16.

Tendulkar announced his retirement from international cricket in front of a capacity filled Wankhede Cricket Stadium in his home town Mumbai. In pin drop silence Tendular delivered an emotionally charged speech to his fanatic fans. He said that he is thankful to the support of his fans even at times when the going was tough and the cricket experts and pundits declared that his cricketing days were over. With tears in his eyes Tendulkar said that it was their whole-hearted love and support that kept him growing as a cricketer.

By nature a very humble individual he praised all the players and accompanying staff  members of the Indian cricket squad. He said that the most important person in his life was his late father. It was due to him, Tendulkar said that he was able to reach this high pedestal in the fiercely competitive world of cricket.

Tendulkar is the most capped player in cricket history. A run accumulating machine, the little master, first over hauled the runs scored by another great cricket Sunil Gavaskar and then he beat the record set by the West Indian cricketing legend Brian Lara. Tendulkar has scored over 11,000 runs in tests with a record number of centuries. He is the only cricketer to score 100 centuries in world cricket.

Earlier, he had announced retirement from One Day International cricket (ODI) in Dec., 2012. Playing in his 2oo Test match against the West Indies, he scored 74 runs in the first innings but was not able to bat in the second innings as West Indies lost the Test by an innings and 126 runs.

On this sad but never-the-less memorable occasion, the Chief executive of the International Cricket Council (ICC) praised Tendulkar for his sports man spirit on and off the field. Further, he added that it was a privilege to play against an adversary of the stature of Tendulkar. He was all praise for him and added that he is yet to meet a better gentleman than Tendulkar in the cricketing world.

It must be taken into account that  world cricket today is tainted by controversies ranging from match fixing allegations to doping scandals, but it goes to Tendulkar’s credit that never once in his sporting career his name appeared in any controversy of the sort. This is a great achievement and honor in itself.

After his retirement the world of Indian cricket would never be the same as the mere mention of his name in the Indian squad made many bowlers, whether, they be spin or fast bowlers, made them shiver at the mere thought of bowling to him__ a batsman par excellence.

It is to be noted that he would not only be remembered for his super human exploits on the field but also because Tendulkar was only a few of the gentlemen left in today’s cricket, once referred to as the game of the lords.

Latest update: The Indian Government awards Sachin Tendular with the highest civilian award, Bharat Ratna ( Hindi meaning Indian jewel) for his contributions to the game of cricket and for being the best ambassador of India the world over.