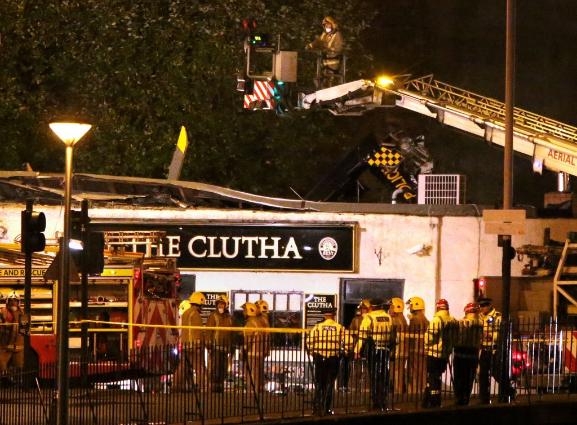 There were at least 8 people killed by the Scottish police helicopter crash on Friday night at 10:25 p.m. The helicopter crashed into the roof of The Clutha Pub, according to Police Scotland authorities, and it has resulted in the deaths of at least 8, though more are feared to have died. Also, at least 14 other people were seriously injured and transported by ambulance to local hospitals in Glasgow, Scotland.

There were approximately 125 people (some reports put the estimate at 150) jammed into the The Clutha to listen to the ska band, Esperanza, perform, and to celebrate the Scottish holiday, St. Andrew’s Day, which was this Saturday. St. Andrew’s Day is named after the patron saint of Scotland.

The band was about in the middle of their set when the police helicopter crashed in the roof of the pub, knocking down a small portion of the roof at first. This prompted some of the revelers at the pub, who didn’t know what had happened yet, to joke about they didn’t know the ska band would be literally “bringing the roof” down.

The civilian pilot of the helicopter and the two policemen he was transporting were three of the 8 who are known, so far, to have died in the helicopter crash on Friday night. The other five victims, according to Chief Constable of Police Scotland Stephen House, were found within the wreckage of The Clutha. He added that 14 others remained hospitalized with serious injuries.

The reason why the 40-foot twin-engine Eurocopter EC135 T2 police helicopter spiraled down and crashed into the roof of The Clutha Pub remains, at this time, unknown, though the cause of the Scottish police helicopter crash will be the subject of an investigation in the days to come.

House said that they were still in “a rescue and recovery situation” and that they wouldn’t know “what – is going on underneath” until the helicopter is moved out of the way.

Immediately after the Scottish police helicopter crash, the people who escaped from the pub, many caked in dust and blood, assisted in rescuing others who were still inside. Some onlookers also helped, including Jim Murphy, a Labour Party member of the UK Parliament.

According to Grace MacLean, who was in The Clutha with a friend, there wasn’t a “bang” when the helicopter crashed into the roof of the pub, and “no explosion.” However, then the entire pub started filling “with dust and you couldn’t see anything, you couldn’t breathe.”

“A black day for Scotland”

Friends and relatives of the victims who perished on Friday night gathered together and laid bouquets of flowers against the outer walls of The Clutha. Prime Minister David Cameron and Queen Elizabeth expressed their thoughts and sympathy.

Scottish First Minister Alex Salmond called the day “a black day for Glasgow and for Scotland.” St. Andrew Day celebrations were cancelled, flags on government buildings were flown at half mast, and a special church service was held at the Roman Catholic cathedral in Glasgow.

Eyewitnesses said it didn’t appear that the police helicopter had caught fire, but police said it was too early to speculate on what caused the crash of the Eurocopter.

There have been other relatively recent incidents of Eurocopter helicopters crashing and resulting in fatalities. One such was this last August, when a Super Puma L2 crashed into the sea near Scotland’s Shetland Islands. In that incident, four people were killed, some of them oil workers.

The editor of the Scottish Sun newspaper, Gordon Smart, said it could have been much worse, if the police helicopter had crashed into Glasgow’s shopping district, which was nearby, or if the crash had resulted in an explosion. If it had, hundreds of people could have potentially been killed.

While it was dangerous to do so, Smart said that something he saw that “will stick with me for the rest of my life” was seeing Glaswegians running toward the pub to rescue people, rather than away from it, to save their own lives if an explosion had occurred.

Though First Minister Alex Salmond called the day “a black day for Glasgow and for Scotland” he added it’s a day that they can also “take great pride in how we’ve responded to this extraordinary tragedy.”

The Clutha Pub, located along the bank of the River Clyde, was the scene of a terrible tragedy Friday night when the Eurocopter police helicopter crashed into its roof. The Scottish police helicopter crash killed at least 8 people, and seriously injured 14. It might take several more days before police are certain about the final death toll that will result from this tragic incident.That’s because the crash made the building unstable, and, until the police helicopter is removed, it will be virtually impossible to thoroughly investigate the scene of the crash.