Sleep Apnea Tests Will Be Required for Obese Pilots 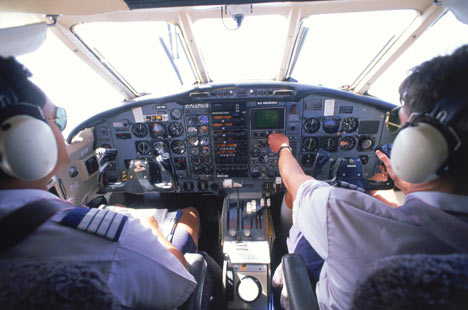 The Federal Aviation Administration has announced that obese pilots and eventually all pilots will have to undergo screening for obstructive sleep apnea. The FAA has decided to put more emphasis on the safety of their passengers by ensuring that daytime sleepiness will not be a problem for pilots. There are also plans in the future to have all air traffic controllers undergo the same screening because a team is only as strong as its weakest link.

Any pilot with a body mass index (BMI) of at least 40 or a neck circumference of 17 inches will have to undergo screening for sleep apnea. The FAA estimates that roughly 125,000 of the accumulated 600,000 commercial and private pilots in the nation will be affected by the policy. According to the National Institutes of Health the BMI of an overweight male would equate to someone who is 5-foot, 11-inches and 287 pounds.

Sleep apnea is nearly universal and can be found in anyone, although is more likely in obese individuals. Federal Air Surgeon Dr. Fred Tilton wrote in a statement announcing the new policy that pilots diagnosed with sleep disorders would need to be treated before receiving a medical certification to fly. Once the FAA completes reviews of  pilots with a 40 or higher BMI, they intend to look at pilots with lower BMI’s to ensure that every pilot is a trusted pilot.

According to the National Institutes of Health, sleep apnea can be recognized by heavy snoring soon after falling asleep; snoring may also get louder throughout the night. The problem comes from people sleeping and not breathing properly. During sleep it is ordinary for breathing to slow or stop, a healthy amount of this would be five to ten times in an hour. Those with sleep apnea slow or stop breathing 40 to 50 times per hour which interferes with the restfulness experienced by the sleeper. As a result, those with sleep apnea are more likely to experience fatigue and daytime drowsiness. It is estimated that only 10 percent of snorers actually have sleep apnea.

Pilot fatigue is something that the FAA does not want to be associated with in any light. In February of 2008 two pilots controlling a Go! Airlines flight to Honolulu fell asleep and missed their destination by 26 miles. The captain was diagnosed with severe obstructive sleep apnea. In February of 2009 the Colgan Air flight 3407 crashed near Buffalo, N.Y. due to pilot fatigue. Pilots are often changing schedules due to travel and as such the FAA wishes to push the importance of being well rested. Rest requirements from the FAA will take affect in January.

To guarantee the safety of all passengers the FAA will require pilots with a BMI of at least 40 or a neck circumference of 17 inches to undergo screening for sleep apnea. Once all pilots under that category are taken care of the FAA will focus on all other pilots. After the pilots the FAA will screen air traffic controllers to ensure that there are no problems in the air or on the ground.