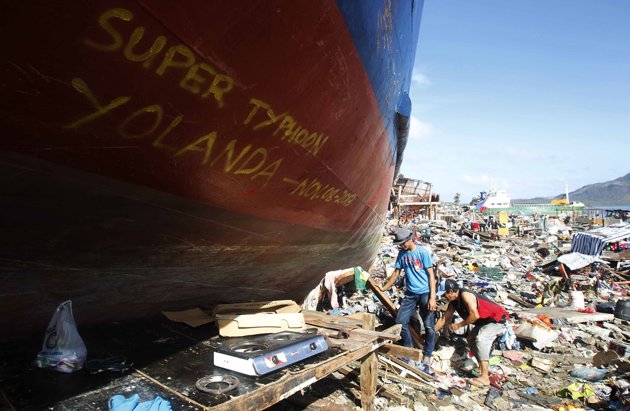 Super Typhoon Yolanda brought tragic devastation to the Visayan Region of the Philippines. Lines of communication were cut from Samar to Leyte, particularly Tacloban City. Electricity and communication lines were likewise cut in the neighboring provinces up to the time this news is being prepared. Super Typhoon Yolanda, estimated to be the strongest this year, destroyed the Telecom towers and power lines which caused the city’s isolation from the rest of the world. The said calamity is rare because it surpassed the strength of the strongest typhoons ever to hit the Philippine area of responsibility. At the moment, the serious problem facing the provinces in the region is communication.
President Aquino himself received the call from Secretary Mons Gaspin 5:30 PM yesterday, after Yolanda’s devastation from 6 until around 10 AM yesterday.

Houses were razed to the ground due to the strong winds and the “storm surge” which is the ocean’s way of devouring the coastal areas. This has primarily occurred in San Jose, Tacloban, City which is very near the airport. Tacloban City is basically surrounded by oceans, except for the northern part which faces the province of Samar. When the water level rose, it literally devoured the city of Tacloban.

A team of reporters passed by a child near a corpse and asked whose corpse that was and the child answered that it was his father’s. Nobody wanted to take the corpse so the team of reporters decided to bring the corpse inside the building. The child said their house, which was near the seashore was also wiped out. Cries of agony could be heard from folks still looking for missing relatives and from those whose properties were destroyed. Three siblings lost their lives in the storm surge along with their grandmother. According to the informant, who happens to be the victims’ aunt, their parents are unaware that their children are already dead.

Basing from the destruction, if forced evacuation could’ve been effected, the whole of Tacloban City should’ve been forcefully evacuated. The extent of destruction showed that the winds were coming from almost all directions. After this calamity, one could give another meaning to a “storm surge” which is comparable to a tsunami bringing with it very strong waves pointing itself to a particular place which it will devour, and whose height is similar to that of a three-storey building. Then it goes back to the ocean, only to come back to its former target. This “storm surge” could be compared to the tsunami which hit Japan causing ocean waters to rise and bringing with it a current as it goes back to the coast. This is what exactly happened to Tacloban City. There is also a big devastation in the downtown area, and even far-flung barangays were not exempted. The destruction was regarded by some government officials to be “beyond expectations”. According to a local, it was a combination of the strength of typhoons “Pablo” and “Sendong” but still much stronger.