By Michael Smith on November 15, 2013Comments Off on Taylor Swift Dissed by Victoria’s Secret Model 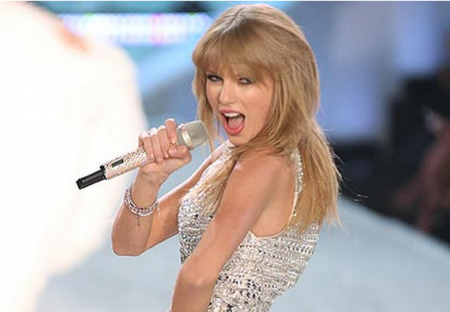 The 23 year-old Red singer has fans and friends amongst the bevy of beauties who get paid to strut their stuff on the runway. Among those models that call Swift a friend; Cara Delevingne, Karlie Kloss; fellow Nashville resident Lily Aldridge and Erin Heatherton all had nothing but words of praise for their pal Swift.

Australian model Jessica Hart was not impressed saying that Taylor just did not “cut it” as a Victoria’s Secret model. Not that Swift was competing with any of the gorgeous women who were modelling the lingerie on the runway. The I Knew You Were Trouble singer performed in a couple of different outfits during the show.

She wore a short Union Jack themed dress with a flowing double train for one number and later showed up in a tiny sequin dress. In both outfits, Swift looked stunning and seemed to be enjoying herself immensely. Taylor was not the only musical talent at the show. Fall Out Boy and Neon Jungle also performed at the Victoria’s Secret Fashion Show, but, they escaped being dissed by the Australian model.

Jessica Hart, the 27 year-old Aussie model who was not impressed by Swift, made the remarks at an after show party. Asked by the press what she thought of Taylor’s appearance on the runway, Hart was quite dismissive and made the statement that she thought the singer was too young to do well. Considering Hart is only four years older than Swift it appears that for whatever reason, Hart had her claws out.

At the risk of being just as tacky as Hart, it should be pointed out that Taylor Swift does not have to rely upon her beauty to make an impression, her talent and music do that for her. Granted, looking good on the runway is something that must be trained for. However, Taylor was not modelling nor was she coming out on stage in lingerie to perform her numbers.

It is interesting to note that the younger models who know Swift were all congratulatory and full of praise about how great Taylor looked and sounded during the show. Swift took to Twitter to post about how excited she was and how much fun she was having doing the show.

Taylor tweeted a picture where she was posing with Erin Heatherton, Cara Delevingne and Lily Aldridge backstage prior to the fashion show’s start.The caption on the instant polaroid snap said that the “best things” happen on the 13th! @ErinHeatherton @LilyAldridge @Caradelevingne #VSFashionShow “Best Friends Forever VS13.”

Jessica Hart may have dissed Taylor Swift after the Victoria’s Secret Fashion Show but the singer won’t be losing any sleep over her remarks. Taylor is a class act and it seems that the Victoria’s Secret model may be suffering from a touch of sour grapes. Not everyone can look stunning and sing as well.