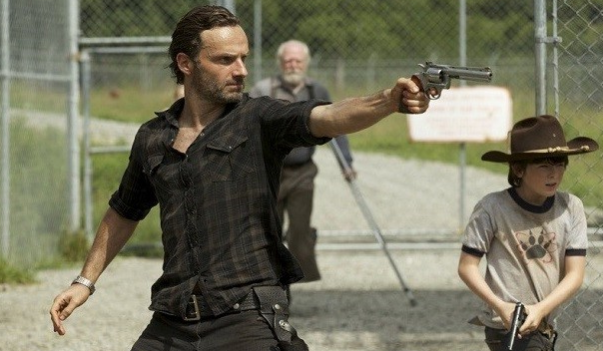 Spoiler Alert: If you are a fan of the AMC smash-hit “The Walking Dead;” and you should be for any number of reasons, make sure you are all caught up on this season before reading this article. Just run over to your DVR or On-Demand and catch any episodes that you’ve missed before reading any further.

Sunday’s episode put to rest the fleeting idea that a man can redeem himself for past sins by simply putting his past aside and adopting a new name. The Governor of Woodbury,  also known to his new tribe as Brian Heriot, returned this season with all the trappings of a new moral character. We see him first at rock bottom; he’s traumatized by his loss to Rick, Michonne and the sundry Prison Crew that he scarcely seems any more alive than the zombies around him.

He is given a new purpose and a new family after he encounters a trio of women in need of his warrior mentality and physical abilities. We are led to believe, or perhaps we just want to believe, that there is a chance for him to walk a new path forward, to become a protector again, instead of the despotic tyrant we loved to hate from the past season of “The Walking Dead.” He is even given a surrogate daughter to replace the one taken from him by the harsh world this show relentlessly immerses us in.

This belief is short-lived, however, as the past becomes present. After taking to the road with his new family, the Governor is found by Martinez, his lieutenant from Woodbury and a man who knows his true face, before Michonne managed to rearrange it for him. By the way, if you think the events of the show are brutal, you should take a gander at the way things played out in the graphic novels; there is absolutely no comparison in terms of raw violence. AMC’s interpretation of “The Walking Dead” is positively bucolic in comparison.

After Martinez saves the Governor from a zombie pit trap, yes those exist, and brings him back to a new camp of survivors, things go dark pretty quickly. The leader of this ragtag band is Peter; a man of compassion and empathy whose character draws immediate comparison to Rick. When given the opportunity to sneak up on an unsuspecting group of strangers, Peter chooses what he sees as the moral course and spares them. That group is, of course, later destroyed by another group; who kills every one of them and take their supplies.

The Governor, the consummate chess player, sees the writing on the wall.

Martinez and Peter find this out the hard way as The Governor, showing glimpses of his old psychotic self, quickly dispatches each of them in brutal fashion. After a bit of the old ultra-violence involving knives, golf clubs and the zombie pit, the Governor is back on top; where he claimed all along that he didn’t want to be.

Yeah, right. Seems as if the seeds of Woodbury are being planted all over again, which is great for the fans. As much as it was entertaining to see him playing the would-be hero, the Governor is at his best when he is at his most villainous.  Also it is even more delicious that he is going to the dark side of the force for what seems like the best of reasons – love.

The episode ends with the promise of another round of conflict with the Prison Crew, as the Governor is last seen outside the prison gates with a gun turned on blithely unsuspecting Michonne and Hershel. If anyone can summon up the full return of the Dark King, it would be Michonne. After all, she is responsible for his current Cyclopean status.

All in all, this character arc has been revealing and entertaining, but now it’s time to get back to business; the business of death. The coming battle promises to change the show’s  roster in some dramatic way.  This is especially true with Rick, the erstwhile White King, having recently banished Carol; one of his most powerful chess pieces.

As the graphic novel’s tagline so aptly implies, this is not a world fit for heroes of a bygone era; if I may paraphrase,“The story of horror survival continues here.”

The Walking Dead: the Black King Advances added by gricelda7 on November 26, 2013
View all posts by gricelda7 →