Apple Inc Mac Pro: Is It Worth the Price?

By Michele Wessel on December 23, 2013Comments Off on Apple Inc Mac Pro: Is It Worth the Price? 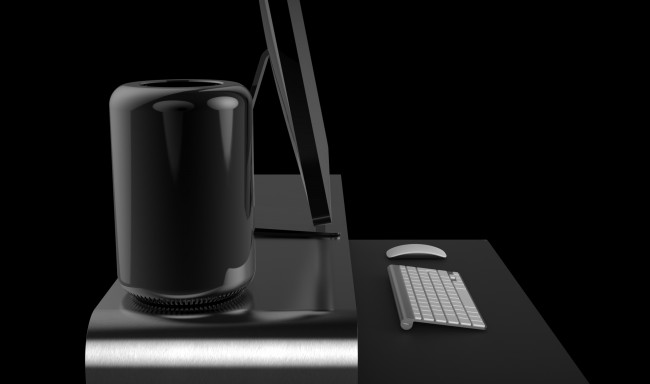 Apple Inc. has just released the re-tooled Mac Pro, but with a hefty price tag of $2,999, consumers are wondering, is it worth it?

Initial reviews of the newly released machine, say yes, probably, at least at sometime in the near future… for media professionals. According to The Verge, this is a computer created at long last for the professionals who have long felt neglected as Apple Inc. developed products for other target audiences.

To start with the most basic observation, the sleek new design is undeniably attractive, and perhaps a bit intimidating. The cylindrical shape, gleaming finish and compact size make for a pretty picture, but some are finding that it is not as user-friendly as they might like. According to the The Verge review,  the new placement of ports on the machine, now located in the back, may make access inconvenient for users. The Verge was also critical of the absence of an SD slot, though other reviewers downplay its absence saying that the likely purchasers, again, primarily media professionals, of the Mac Pro will be using many different storage cards making the presence of a generic standard slot unnecessary.

The Verge review praised the Mac Pro for maintaining its two ethernet slots, its quietness, relatively cool temperature while running and the redesigned Mac Pro’s compact size. At just 9.9 inches tall, 6.6 inches wide and weighing in at about 11 pounds, it is the most portable Pro ever seen, taking up only about a quarter of the space that its prior iteration did. For those who work on the go or edit in collaboration with others, the potential portability of the device is a definite plus.

But what about performance? The answer to that question is what really determines whether the hefty price assigned to Apple Inc.’s Mac Book Pro is worth it. Reviewers across the board seem to be impressed. The new Mac Pro is the “fastest and most powerful Mac ever made.” The caveat is that its most impressive performance is really only optimized with software that is specially geared toward the machine’s powerful capabilities.

Because the Mac Pro is so new, not even in the hands of common users as of yet, there is not much software available that meets those requirements. However, since the Mac Pro is the standard for most media professionals, it is likely that software capable of making optimal use of its impressive capabilities will quickly become more available. Apple Inc. has banked on the fact that software companies will make it happen.

For now, Final Cut Pro X is the premier software available to demonstrate what the new Mac Pro really has to offer the media professional. Reviewers report that the machine is easily able to support the simultaneous running 16 4k streams and that “4k clips are able to render and display at least a dozen filters in real-time.” Users of Adobe, at least at this point, may not see the same improvement in performance, however, and until Adobe makes software available that takes full advantage of the new Mac Pro’s capabilities, the upgrade may not be worth it.

Reviewers make the additional point that the base $2,999 price tag, doesn’t include everything you’ll need. The base price includes the unit with a “quad-core 3.7GHz Intel Xeon E5 processor, 12GB of Ram,  two AMD FirePro D300 graphics processors, and a 256GB solid-state drive.” But heavier duty users are likely to want to upgrade the processor, the amount of memory and the graphics capabilities as well. The monitor and all other accessories will be extra too, not to mention the upgraded software. Reviewers are estimating that the actual cost of a premium professional set up for Apple Inc.’s Mac Pro will cost more in the neighborhood of $10,000-$12,000.

The bottom line? For those who make their living as media professionals, use software that will allow them to take advantage of the new machine’s capabilities and want to be the best of the best, reviewers say that Apple Inc.’s new Mac Pro may be worth the investment. Other media professionals may want to wait until software catches up with the new Mac Pro before taking the plunge. As for casual computer users who will likely never take advantage of all the new machine has to offer? Reviewers advise that it is probably best to admire this beauty from afar.