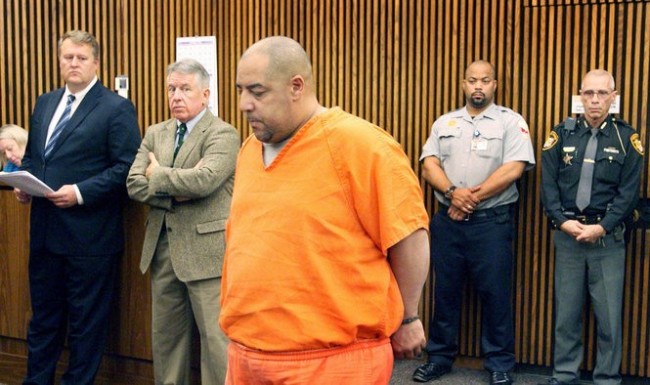 In a grim nightmare within a neighborhood in Cleveland, another truth follows after the discovery of three, missing women who were held in the home of Ariel Castro. Secrets, murder and darkness so deep permeated his next door neighbor. Elias Acevedo pleaded guilty to raping his three daughters while they lived with him, his sister-in-law and more stunningly? Acevedo has confessed to the cold case murders of Pamela Pemberton and Christina Adkins. The revelation stuns the community that is still reeling from the discovery of Gina DeJesus, Amanda Berry and Michelle Knight.

This Cleveland based writer recalls the moment, the day and the hour when three missing girls finally escaped the captivity of a hell home. Ariel Castro received his life sentences and was found dead in his cell, suicide listed as the cause of death. Now, it seems there was a darker thread of continued hell in a neighborhood that has suffered the pain of wondering how three girls went missing for so long, to questioning of law enforcement and their inability to scour the neighborhood. If police had investigated the homes during the disappearance of the three young women, what other secrets may had surfaced?

In 1995 the disappearance of Christina Adkins rocked the city. Once the three missing women were located, Adkins’ family questioned if Castro may had a hand in her disappearance. Suspicion moved over to Acevedo as the FBI gathered incriminating evidence showing the pattern of abuse against his daughters. Originally, Acevedo denied the charges and further denied playing a part in the disappearance of Adkins. Until the FBI offered to removed the death penalty.

Acevedo confessed to the crime of killing Adkins. In the confession, he states he came across Adkins when she five months pregnant. Adkins was carrying the child of Acevedo’s cousin. When Adkins refuted the sexual demands of Acevedo, he raped her. Adkins threatened the suspect with exposure and that is when Acevedo killed the young, expectant mom. For 18 years, the body of Adkins remained locked in a utility vault. Just three months prior to the disappearance of Adkins, Pamela Pemberton also went missing. She was a 30-year-old neighbor of Acevedo’s.

In a fashion familiar to Acevedo, he tried to have sex with Pemberton. She refused his claims and Acevedo raped Pemberton and killed her, leaving her body in a wooded area. Her body was discovered by neighborhood kids and her story, her injustice has remained listed as a cold case for nearly two decades. It was FBI Special Agent Andrew Burke who took part in the hearing on Monday to discuss these interactions and finally the confession from Acevedo.

It was his daughters aunt, Acevedo’s fourth rape victim, that was a key asset to investigators and the case proceeding. She provided information she formerly held back, due to the influx of fear. “I am grateful,” she stated advising she came forward, after stepping away from fear, “but I’m not a coward anymore.” No one who witnessed this case and the story of this woman could ever utter the word. Her bravery removes a monster from the streets.

The defense attorney representing Acevedo, states his client suffers from mental issues and has shown “extraordinary remorse for everything that happened.” That is little comfort to the families of the dead, young women and further yet, Acevedo’s own daughters.

The three women stepped forward, permitting their relationship with the suspect to be released to the media. They had their opportunity to speak openly to a man who became a monster instead of a father. Pemberton and Adkins’ families stepped forward to speak. The grief they have suffered for the last 19 years is great, Pemberton’s sister stated it took her “years to stop crying everyday.” Adkins own sister, Tonia stated Acevedo could plead and beg, but nothing he uttered would bring back her sister, or the void in their family. “We never stopped looking for her,” Tonia stated.

This case brings a mountain of questions, inquiries and concerns. In the 1990’s, FBI officials are the first to admit there was a rash of unsolved rape cases, due to the lack of technology available today. What other secrets does Cleveland store? In this last year, three missing young women have come to surface, escaping the hell house of Ariel Castro. Further yet, is now the neighbor of Castro, Elias Acevedo who has confessed to two cold case murders and the rape of his own daughters and sister-in-law. He will serve life in prison with no chance at parole, officially 445 years was his sentence. There is hope that families in this diverse and ever-growing city, will at some point feel safe and not have to wonder if their neighbor is a murderer or what dark secrets may reside in the interior of their homes.