Phil Robertson Talks Himself Into Another Controversy [video] 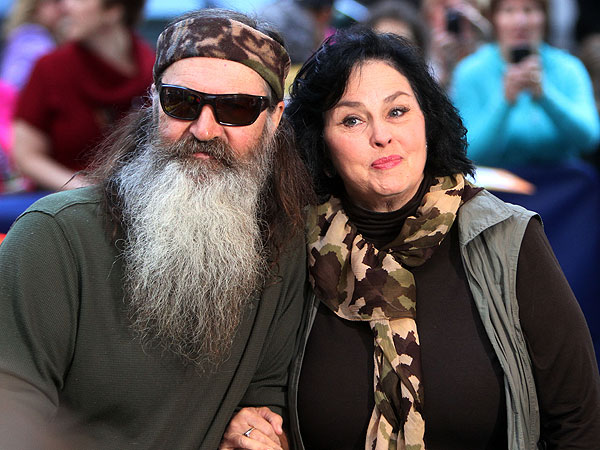 It seems Duck Dynasty star  Phil Robertson is attempting to get used to the hot seat. The Duck Commander has successfully talked himself into another controversy. He was suspended by the A&E network for his anti-gay remarks in a GQ interview, but recently reinstated after the fans fought for his right to state his beliefs.

Well now the Duck Dynasty patriarch sits on the brink of another controversy after a video surfaced on YouTube of Robertson telling men it’s okay to marry young girls. In fact he actually warns men against marrying girls who are out of their teenage years. Even though he is again stating his beliefs it will be interesting to see how the Christian community, who went over and beyond to support him when he spoke against gays, will respond to this theory.

When he spoke out against the gay community many conservatives backed Robertson’s comments. Nearly 200,000 supporters bombarded the A&E network with petitions, on social media and their website voicing their disapproval of Robertson’s suspension.

Duck Dynasty has approximately 14 million viewers and their reality show brings in about $400 million from merchandising so of course the network backed down from the suspension and reinstated Robertson. The Duck Dynasty family made it very clear that they supported their patriarch and would not do the show with him.

The network made certain to release a statement separating Robertson’s views from their brand. They released a statement saying that they were extremely disappointed with Robertson’s comments in GQ. They also said that his comments were a reflection of his own personal belief and had no connection at all to those of the A&E Networks.

The footage which Robertson calls, “river rat counseling” surfaced on YouTube Monday and is believed to be from a Georgia Sportsmen’s Christian event from 2009. The Duck Dynasty star advises men to marry girls when they are about 15 or 16. He said if you wait until they are 20-years-old they will be, in so many words, “gold diggers.”

He said it’s important to make sure the girl is a Christian, carries her Bible and knows how to cook. Even though his remarks are from a video which originated in 2009 similar remarks were made in Robertson’s book, Happy, Happy, Happy: My Life and Legacy as the Duck Commander.

To his defense Robertson did state that the guys would need to check with the girl’s mother and father before marrying her. In some states it’s against the law to marry underage partners under any circumstance and in other states it’s allowable with parental consent. In other words, the man better know the laws of the land where he resides before following that advice or he could end up in jail.

Robertson also said in his above referenced book that he was 16 and his, wife Miss Kay, was 15 when they married each other. He admitted that today that seems young and many would frown on that but he knew if he married a 15-year-old young woman she would be more profitable to him. In the state of Louisiana, where they were reared, such unions are legal when accompanied by parental consent; and in his day they were also common.

According to the ages stated in Robertson’s book surround the time he and Miss Kay married they were both young. So, perhaps he’s saying that Christian teens should marry young as opposed to an older guy marrying a young girl. Robertson said in his GQ interview that what’s right and what’s wrong seems to be blurred now and sin has become fine. Unless the lines are blurred for this Duck Commander it pays to reason that he is referencing teens marrying teens.

Either way, the network will probably just let this slide and so will the Duck Dynasty fans. New episodes of Duck Dynasty, which include the well-loved patriarch, are scheduled to air on the A&E network January 15, 2014.

Phil Robertson, from the hit reality show Duck Dynasty, was recently reinstated after being suspended for making offensive comments about the gay community. His recent controversy, which also concerns his strong belief system, has him in the midst of a divisive situation once again.

2 Responses to "Phil Robertson Talks Himself Into Another Controversy [video]"