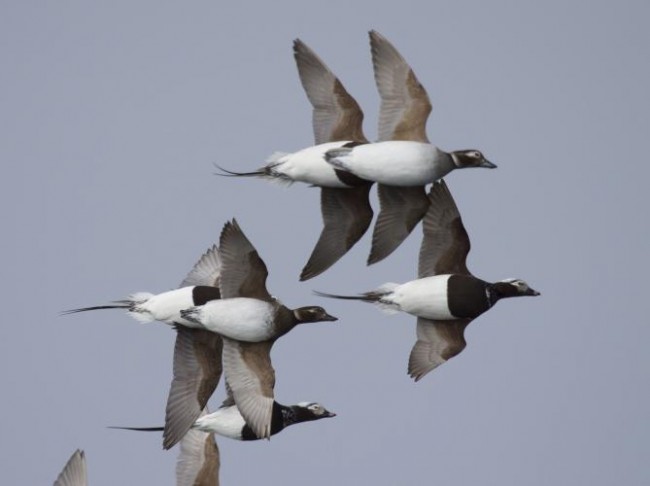 Botulism has befallen birds in Lake Ontario, according to the New York State Department of Environmental Conservation (DEC). Different species of birds have been killed by the Type E botulism.

According to a press release from the DEC, Type E botulism is responsible for the deaths of 200 to 300 loons in Lake Ontario since 2006. Other birds affected by this disease are long-tailed ducks, grebes and gulls, specifically birds that eat other animals contaminated by Clostridium botulinum, bacterium that causes paralysis and then eventual death by drowning. Type E botulism usually occurs in the Great Lakes; Lake Ontario borders Canada and New York.

Although there is no clear answer for the reason behind the Type E botulism, scientists have been testing deposits from the bottom of the Great Lakes and the distribution of the waterbirds. The main scientific concern is how the toxin travels up the food chain, thus causing so many bird deaths.  Initial discoveries indicate that birds diving for fish at the bottom of the lakes may account for the proliferation of Type E botulism. Some areas of the Great Lakes have had concentrated deaths, specifically Sleeping Bear Dunes National Lakeshore (600 bird deaths in 2012) and Lake Huron (6,000 beached dead birds, also in 2012).

Another villain in the spread of Type E botulism  is global warming, much of it coming from factories, and water runoff due to floods. Smoke and pollutants from waste contribute to warm temperatures in the lakes, and with decomposing algae and invertebrates such as worms and bug larvae, this creates a prime setting for the development of Type E botulism.

According to the USGS, there are several types of toxins caused by Clostridium botulinum, but the most common and ones we’ve seen are Type C (which affect waterbirds, shorebirds, and colonial waterbirds) and Type E (gulls and loons).

On how to trace the path of Type E botulism, David Blehert, a microbiologist working with the USGS National Wildlife Health Center, says, “You find a body somewhere. You want to find out where the incident took place. You look for clues on the body, you find a piece of hair, a piece of fiber, and trace it back to the location and hopefully find your culprit.”

Considering that the toxin is natural and man made, preventing the spread of Type E botulism could be a losing battle. Preventing contaminated water runoff, cleaning the lake waters of rotting algae, and diverting the paths of the waterbirds elsewhere might be a task too monumental for scientists. Type E botulism will likely continue to befall waterbirds in Lake Ontario.

For waterfowl hunters, precautions must be taken to prevent the spread of Type E botulism. According to Michigan’s Department of Natural Resources, it is recommended that hunters wear plastic or disposable gloves when butchering or skinning waterfowl, remove and dispose of intestines and avoid direct contact with intestines, wash hands before and after handling waterfowl, keep waterbirds cool until butchering, and then refrigerate or freeze afterwards, and always cook waterbirds thoroughly, although this won’t necessarily kill the toxin.