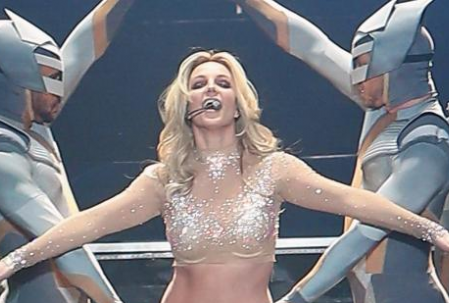 Singer Britney Spears has been accused of cheating her fans at Planet Hollywood the new “residence” where she’ll be performing for the next two years. Fans and critics both accused the former Disney entertainer of lip-syncing to some, if not all, of the songs in her stunning debut.

Spears has had allegations from fans on Twitter that she was not actually performing some of her songs live  the singer’s Las Vegas Planet Hollywood premiere. These accusations came after  she blew critics away with her stunning show opening. Music critics have been “showing the love” for 32 year-old mother of two and pop’s aging princess Spears as her dazzling performance hit all the right chords. All, that is, except for the dis-chord of that pesky lip synching habit that the singer has grown to rely upon.

Before Spears began her new residency at Planet Hollywood, the press pointed out that her lip sync ways had to go for this new phase of her career. The former Mouseketeer has been accused of cheating her fans in prior concerts by syncing to her hits versus performing live. Before her residency began in Vegas the singer was asked if she would be continuing this practice. Spears responded in the affirmative.

Her management, however, said no and confirmed that Spears would be singing all her songs live. This appears to have been forgotten “on the night.” Accusations that Britney Spears was lip syncing at her Las Vegas premiere were made by some critics and fans of the singer on Twitter who caught her opening show at Planet Hollywood.

The Toxic and Work Bitch singer had previously stated that she would be lip syncing during her two year residency. Spears’ management quickly denied that this would be happening, but, it seems that Britney has stuck to her original plan of attack.

Social networking site Twitter got very busy with fans of the singer tweeting their disappointment at their idol’s decision to sync versus sing: 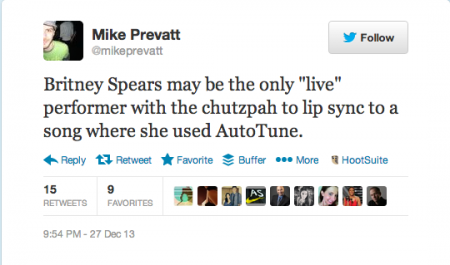 Another Twitter fan, William Belli, tweeted that he watched Spears perform and he noticed her sync was not timed properly being off by approximately five seconds. The singer’s management have not addressed the issue and have instead offered a statement saying that Spears is “killing it,” and that Caesars was ecstatic about the turn out.

Other sources say that management are worried that once fans realise the show is not “live” that audience numbers will dwindle. Spears’ management were so worried about allegations of lip syncing that they produced a “cheat sheet” which specified the singer would be singing all her songs live with no syncing for any number. Fans, however, are claiming that Britney Spears cheated her’s at  the Planet Hollywood debut.

The performer’s fans, however, have reported a different sort of “cheating” claiming that not only did Spears not perform live, but, her timing was off. The show itself was aimed at a younger, perhaps more impressionable – or more easily duped – crowd. There can be no denying that the show was, overall, a brilliant spectacle and did deliver a “piece of the singer.”

Unfortunately all that glitz and glamour cannot hide the facade of singing live when the singer’s own timing is off. Even a five second delay is noticeable and a few critics felt that Spears was simply going through the motions in some of her performances. The Los Angeles Times pointed out that her number Piece of Me was flat and uninspired with the singer failing to deliver the original “strut” that the song delivered on the album.

Britney Spears premiere performance at Planet Hollywood in Las Vegas has been marred by accusations of lip syncing mainly from her fans on Twitter. While the critics have been quick to praise her show’s opening night, fans have been singing a different tune on Twitter. The song they are singing  is that Spears is cheating in her new “home” in the Nevada playground.

7 Responses to "Britney Spears Cheating Her Fans at Planet Hollywood?"