Druids Unhappy with Revamping of Stonehenge 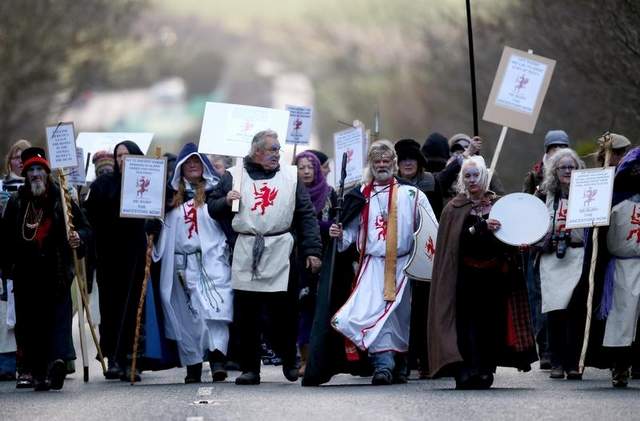 Modern day Druids are extremely unhappy with a $44 million revamping that is underway at Stonehenge.

Numerous dozen Druid members that were dressed in flowing robes were protesting at the site on Wednesday. They were demanding for a reburial of Neolithic remains which have been put on display in a presentation about the prehistoric mysterious circle of stones.

A Druid by the name of King Arthur Pendragon, who is leader of a Druid group known as the Loyal Arthurian Warband, equated the display of the skeleton bones to some sort of Victorian peep show.

There has been a brand new exhibition center erected near the Stonehenge site. It is projected to hopefully give the visitors who come there a more complete history about the monument.

Stonehenge is located approximately 80 miles southwest of London. It was built up over countless centuries and is believed to have started back about 3,000 B.C. for a purpose that still remains unclear to this day.

English Heritage, which manages the Stonehenge project, explained that it had thought about using an imitation skeleton, but it believed that authenticity was very important in order to be able to tell England and Stonehenge’s story. The Druids are very unhappy with this action.

Stonehenge is located on the English countryside near a town called Wiltshire. It has become known as one of the most famous locations all over the world. Stonehenge is now the remains of, what was at one time, a ring of giant stones which were standing. They had been set in earthworks. They were believed to be in the middle of the most solid compound of Neolithic monuments located inside England.

Archaeologists think that Stonehenge could have been erected anytime between 3000 B.C. and 2000 B.C. They performed radiocarbon dating back in 2008. It showed that some stones were put up at the site around 2400 B.C.

There is a round ditch which has been dug out surrounding Stonehenge. This is thought to be the oldest part of the monument. It could even be as old as 3100 B.C. Stonehenge and all the surrounding area is on the ancient site list of World Heritage Sites. It was added there back in 1986. The monument is nationally and legally protected and this is another reason the Druids are in such an uproar. They feel what the new exhibition center is doing is totally breaking all the national and legal laws. They believe it should never have been erected near the Stonehenge site.

Other archaeological indications were discovered that shows Stonehenge might have been a burial ground from the very beginning. The Druids believe this is all the more reason to put the Neolithic skeleton back in its resting place and that it should have never been disturbed. It is believed that burials went on at the monument for over another 500 years. Stonehenge is considered a place of deep religious connotation for the Druids. They plan on continuing to protest until the bones are returned to their final resting place.

The Druids will remain unhappy with the revamping of Stonehenge until their requests are fulfilled.

One Response to "Druids Unhappy with Revamping of Stonehenge"