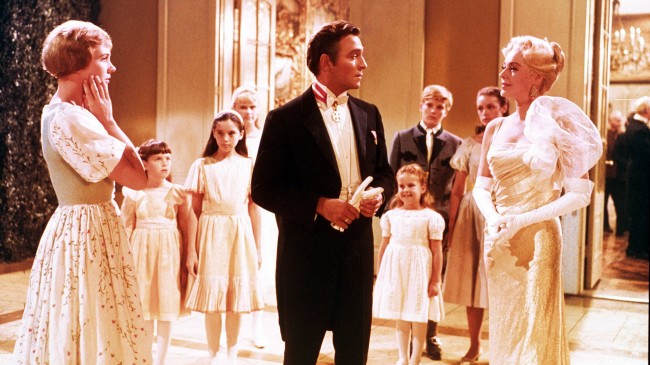 Eleanor Parker, who played Baroness Schraeder in the The Sound of Music, and whose acting was nominated three times for an Academy Award, has died at the age of 91.  Parker’s character in the film (pictured above right) loses Christopher Plummer’s character, Captain von Trapp, to Julie Andrew’s character, Maria Rainer.

According to a family friend of Parker’s, Richard Gale, she passed away peacefully on Monday morning from complications due to pneumonia.  Gale said that she died, with all her children around her, at a Palm Springs medical facility close to her home.

Renowned for her portrayal of strong-willed women, she received Oscar nominations in 1950, 1951 and 1955.  Soon after, her career started to wane and the last really memorable role she played was the baroness in the 1965 epic The Sound of Music, opposite Christopher Plummer and Julie Andrews.

Plummer said in a statement that Parker was one of the most beautiful ladies he had ever known and that he was sure “she was enchanted and would live forever.”  He was sad to hear the news that Eleanor Parker, co-star in The Sound of Music had died aged 91 years.

After appearing in The Sound of Music, Parker worked infrequently, including appearances in several popular TV shows.

When interviewed back in 1988, Parker explained that she never could reach the same level of stardom her co-stars enjoyed because she was first and foremost a character actress.  She said that she had played the part of so many different individual characters, her own personality had never emerged.

Parker grew up in Cedarsville, Ohio and always yearned to be an actress.  When her family moved to Cleveland, she started taking acting lessons.

Parker moved to Pasadena, where she was first found at the Pasadena Playhouse, like many other famous stars, including Dustin Hoffman, Robert Preston and William Holden.  She had her first bit part in the film They Died with Their Boots On at the age of 19, starring with Errol Flynn.

Her career really kicked off when she signed a contract with Warner Bros, for whom she initially played minor roles.  Eventually, the dramatic depth of her acting was recognized by the studio.

Eleanor Parker starred in the remake of the film Of Human Bondage in 1946 where she played the role of Mildred Rogers.  Twelve years before, the original film of Somerset Maugham story was what launched Bette Davis to stardom.  When Parker started filming, Davis sent flowers with a letter, saying she hoped that the role of Mildred would do as much for Parker’s career as it did for her own.

Regrettably, the remake didn’t have the same success as the original film and Parker went back to lesser roles until in 1950 she appeared as an prison inmate in the movie Caged, from which Parker received her first nomination for an Oscar as best actress.

The second nomination was achieved the next year when she played Kirk Douglas’s wife in the film Detective Story.

After several different roles, her career blossomed and she took on the most challenging role of her life in 1955, playing the character of opera star Marjorie Lawrence in the film Interrupted Melody. A challenging role indeed, as she had to lip-sync in total nine arias, in three languages, but for her efforts she achieved her third Oscar nomination.

Parker was married four times.  The first three marriages ended up in divorce.  She  married Fred L. Losse, followed by producer Bert Friedlob, then painter Paul Clemens and her fourth and longest marriage was in 1966 to Raymond Hirsch, who passed away in 2001.  She had three children by Friedlob, Susan, Sharon and Richard, and a son with Clemens, actor Paul Clemens.

Eleanor Parker will be missed by family, fans and friends, as she leaves this world at the age of 91, and below is an extract of her appearance in the film The Sound of Music.