By James Fenner on December 18, 2013Comments Off on ISS Christmas-Week Spacewalks Planned to Replace Pump Module 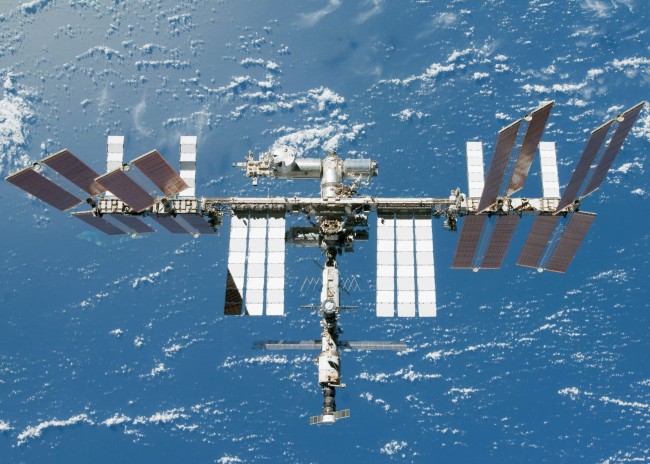 Astronauts aboard the International Space Station (ISS) are slated to perform a number of spacewalks, during the Christmas week, in a bid to replace a faulty coolant pump. In light of the recent technical issues, operations have been scaled back aboard the habitable satellite – currently positioned in low Earth orbit – as officials set about resolving the glitch.

On Dec. 17, 2013, NASA officials announced they were postponing the commercial cargo resupply mission to the ISS. Instead, the space agency’s primary ambition is to focus on preparing a series of spacewalks to replace a defunct pump module.

It is expected that NASA will broadcast a televised news briefing at 3 p.m. EST, on Dec. 18., to allow a preview of the spacewalks to be demonstrated. The preview will occur at NASA’s Lyndon B. Johnson Space Center (JSC) in Houston, Texas.

Consequently, the launch of Orbital Science’s Cygnus spacecraft has been delayed, until January of next year. In a recent press release, NASA explained the postponement of the Antares rocket and its payload would provide sufficient time, for both ground control teams and the crew, to address the fault with the coolant pump.

When NASA retired its 30-year shuttle program, back in 2011, two private space companies took on the responsibility – SpaceX and Orbital Sciences. Both companies have highly lucrative contracts with NASA to perform a series of resupply trips. Owned by business entrepreneur Elon Musk, SpaceX has been awarded a $1.6 billion contract to perform a total of 12 resupply missions. Meanwhile, Orbital Sciences will perform eight cargo missions, as a part of a $1.9 billion contract.

Thus far, NASA has revealed that two members of the ISS will perform up to three spacewalks, during the Christmas week, on Dec. 21, 23 and 25. The Expedition 38 astronauts, Mike Hopkins and Rick Mastracchio, will replace the pump module with a spare part – already aboard the ISS – contained within an external stowage platform. The spare pump is found in the space station’s truss, which supports the radiators, solar paneling and external cooling loops. Each of the spacewalks are set to commence at 7:10 a.m. and could last up to six and a half hours.

The ISS is currently home to a crew of six members. Aside from Hopkins and Mastracchio, the station accommodates Japanese astronaut Koichi Wakata, alongside three Russian cosmonauts – Mikhail, Tyurin, Sergey Ryazanskiy and Oleg Kotov.

Speaking to Reuters on Thursday, a collected Mastracchio had the following thoughts to offer:

“It’s a serious problem, obviously it’s something we have to fix… It’s not something I’m worried about though.”

The coolant pump glitch materialized on Dec. 11, and is associated with one of two cooling loops, responsible for circulating ammonia around the exterior of the ISS. The cooling loops vent heat into space, maintaining the internal and external equipment at the appropriate temperature.

An array of solar panels are fitted to the station, helping to generate power for maintaining regular operations aboard the ISS; this includes life support systems, laboratory equipment and storage freezers, to name just a few. Yielding between 75 and 90 kilowatts of power, the ISS outputs plenty of waste heat that must be efficiently vented into space to prevent overheating.

Ultimately, with the Loop A cooling system no longer fully functional, Loop B has now assumed the brunt of the work. Speaking to Space.com, NASA capsule communicator Lucia McCullough recently sought to explain the ISS’s current predicament:

“The [External Thermal Control System] Loop A is still running but the flow control valve doesn’t appear to be positioning properly, so the Loop A is very cold… We’re not expecting it to get warm enough for us to be able to reintegrate [Loop A] for heat rejection.”

Essentially, to prevent Loop B from becoming overburdened, a number of noncritical systems have been shutdown, including hardware involved in scientific experimentation and research (the Japanese Kibo lab and the European Columbus lab), alongside systems inside the U.S. Harmony 2 module. However, vital systems, including life support and freezers, remain powered and fully functional.

Engineers believe they have narrowed down the source of the problem to a malfunctioning flow control valve, designed to moderate the flow of coolant.

The coolant pump module – weighing in at over 250 kilograms – was previously replaced in August of 2010, during three spacewalk ventures. However – on this occasion – the actual pump module had failed, as opposed to the control of a valve.

It is hoped Hopkins and Mastracchio can achieve their mission, to replace the faulty pump module of the ISS, in just two spacewalk ventures over the Christmas week. If this is not possible, the pair will have to perform a third spacewalk on Christmas Day.