James Bond Is an at Risk Alcoholic According to Researchers [Video] 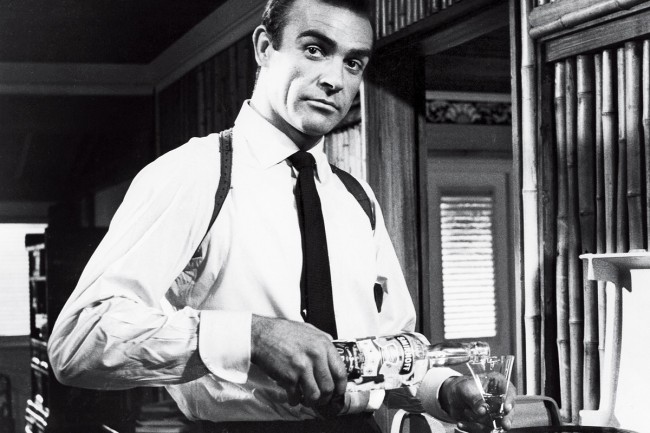 The only thing more memorable about James Bond than the way he delivers his name — “Bond. James Bond.” — is the way he orders his martini. “Shaken, not stirred.” But now Bond’s second most famous catch phrase might be his most threatening villain. A new team of British researchers has concluded that James Bond is an at risk alcoholic who could die by the age of 56 due to liver damage.

Scientists, bizarrely, wanted to record exactly how much alcohol Mr. Bond drinks on a daily basis. They then went to work trying to deduce just how much of an effect his consumption could have on his health.

Researchers say Bond is an at risk alcoholic because his weekly alcohol consumption reaches a total of 92 units per week.

It turns out that unit is not secret spy code but actually a measurement of the “volume of pure alcohol in an alcoholic beverage.” Units are used in the United Kingdom, where Bond is a native, to register guidelines for citizens to monitor their consumption.

In the UK one unit is 10 milliliters or .33 fluid ounces. To make it more concrete, the study views a beer (pint) as three units and a bottle of wine as nine. They did not comment on a martini.

Bond’s consumption is more than four times over the margin commonly recommended by doctors. In Bond’s defense he does not deal with common levels of stress on the job site.

The study was published in the British Medical Journal’s annual Christmas edition. Motivation for publishing this study was not part of a 007 secret mission but actually an effort to raise awareness about alcohol consumption during the holiday season when people are more inclined to go to parties and indulge in libations.

The same study announces that “people generally underestimate their alcohol consumption by about 30 percent.”

In a mock recommendation the study gave some advice to Mr. Bond. “We advise an immediate referral,” the study wrote. As well as a “further assessment and treatment” and “a reduction in alcohol to safe levels.”

This study was developed with evidence gathered from the original 14 James Bond books written by Ian Fleming.

But Bond’s alcohol abuse is not all fun and games. Nearly 2.5 million deaths are attributed to alcohol use worldwide. Causes of death can stem from anything like liver cirrhosis to alcohol poisoning. The study also reported that if a normal man drank as much as James Bond does in his books he would be at a very high risk to suffer sexual dysfunction. How damaging that would be to the Bond reputation?

Bond’s popularity will remain with or without his martini, so it actually is worth wondering if in future generations we will see a James Bond who orders a club soda. If this sounds preposterous, think about all the film heroes who used to smoke pack after pack of cigarettes in their movies to lend them a debonair appearance. Now the practice is commonly left out due to health concerns. The same could become true of martinis and bourbon in the future after British researchers conclude that James Bond is an alcoholic at risk for premature death and other symptoms due to his excessive consumption.

Watch a compilation of Bond’s famous catchphrase in the video below.

James Bond Is an at Risk Alcoholic According to Researchers [Video] added by Nick Manai on December 13, 2013
View all posts by Nick Manai →