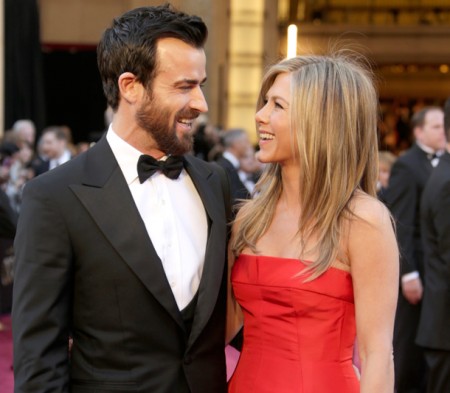 Good for Jennifer Aniston. She has come full circle, throwing a holiday party at her magnificent estate to celebrate her particular successes and enjoy festive tree-trimming occasion. Aniston and party co-host fiancé Justin Theroux packed their home in Bel Air, California, over the weekend, with as many famous Hollywood star-studded friends as possible. Some of the guests included Courtney Cox and musician Johnny McDaid; Robert Downey, Jr. and his wife Susan; and Jason Bateman and his wife Amanda Anka. Other guests included Chelsea Handler, Tobey Maguire and his wife Jennifer Meyer, Will Arnett, and none other than Brad Pitt’s ex-girlfriend, Gwyneth Paltrow and her husband Chris Martin, just to name these few.

Several reports have alluded to Aniston having gone through an “awkward” phase in her life and surmounting it. The period in question, Aniston recently told Parade, was when she was in her 30’s; she confessed to having “insecure” moments.

That period for Anniston occurred after her break up with then-husband Brad Pitt, which also shocked and sorrowed many of her fans.

The Hollywood power-couple of the new millennium, Jennifer Aniston and Brad Pitt, had married on July 29, 2000, after quietly dating for two years. Someone playing Cupid had set them up on a dinner date in 1998;  the “love” arrow pierced with precision to link the darling couple together. They kept their new relationship hushed until they wed in a luxurious ceremony in Malibu, California.

Aniston’s father, actor John Aniston, 71, of Days of Our Lives, had told People that his daughter looked beautiful and that the wedding was spectacular. Naturally, that would seem true when the marrying couple featured “fireworks” at their wedding to honor Independence Day.  There were around 200 guests in attendance, along with a gospel choir, four live bands, and roughly 50,000 flowers in the celestial-like wedding extravaganza.

Then, after seven years of marriage, came the surprising formal announcement that the couple had decided to separate. If we recall, it appeared that Pitt, who was still married to Aniston in 2003, had begun a new relationship with actress Angelina Jolie during the filming of Mr. & Mrs. Smith. However, upon the announcement of their decision to separate, they had said in their joint statement that their separation was not resultant of the speculations the tabloid media had reported. They explained that their decision to separate came from much thorough consideration, and that they would remain happily committed to the great friendship, admiration and love that they had for each other.

In 2002, while still married to Pitt, Aniston had told People she believed that they would “absolutely” start a family sometime in the future; however, that never came to pass. Today, though, Jennifer Aniston comes full circle from that era and throws a wonderful party, expressing personal triumph over insecurities and greatly spurring hope and encouragement for anyone presently going through an “awkward” moment in life themselves.

With good reason, in 2004, Aniston ended up on the cover of People’s Most Beautiful issue. Not only is she gorgeous and worthy of landing a spot on any “most beautiful” categories, but Aniston as well is a hard-working, fair-minded individual, even though the tabloids media clamor to her and oftentimes speculate on and report things not exactly confirmed by Aniston.

Of her past, Aniston says that far behind her are those “awkward” moments she had lived some fifteen years ago, and that, at this moment, nothing is here to worry her, because life just gets better. She is centered more in her mind and body, and life is full and wonderful,” said Aniston.

Currently, Aniston reveals that she is about to play a character who is a lot of fun for her in the upcoming Horrible Bosses sequel, and that she is further considering directing a full-length feature, probably next year.

For now, as Jennifer Aniston has come full circle and throws a party; the blessed hostess focused on having good food at the Christmas bash for all of her favorite friends, and really good music featuring Charlie Brown’s Christmas songs and other traditional music as well.

Indeed, comfortable she is in her “own skin” when, with her new beau, fiancé Justin Theroux, their smiling eyes beam like shooting stars.