Kids Asking Questions About Santa? Here’s Exactly What You Should Tell Them 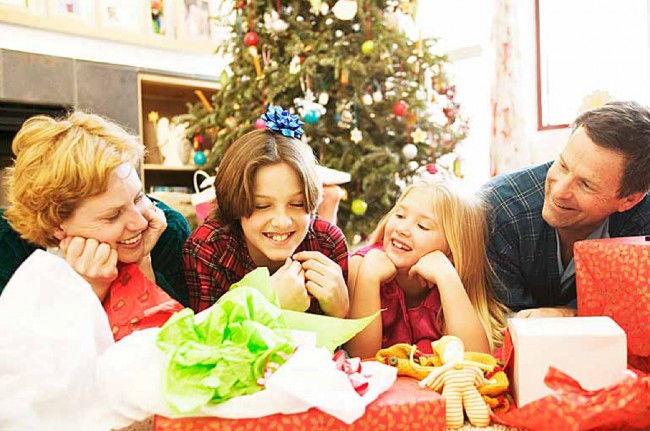 Uh oh. It’s the moment all parents who celebrate Christmas dread; the moment when your kids start asking questions about Santa. It can start as young as age four or five: your child walks up to you and demands to know the truth. “Ok, I need to know: Is Santa Claus real?” they ask, staring up at you with their big adorable eyes. At that instant, sheer panic sets in. You haven’t prepared for this moment! Should you lie? Should you tell the truth? Will your child be upset if you level with him or her? What if he starts to cry? What if she is scarred for life?

In some ways, “the Santa talk” is the elephant in the room of our society. All parents who participate in the Christmas tradition dread it, and yet, it’s not very widely discussed in our culture. This often leaves parents feeling as though they are in a kind of moral limbo when they are approached with the inevitable Santa question.

Luckily, author Ryan Swanson has written a book to address this issue. He got the idea to pursue the book when he was driving one day and received a frantic call from his brother. Swanson’s niece had begun asking questions about Santa. He pulled over to the side of the road and talked his brother down from a moment of complete panic, then decided to write a book on this complex and sometimes anxiety-inducing subject.

Swanson interviewed adults about their experience as children when they had “the Santa talk” with their own parents. He compiled his data into a humorous and heartwarming book called The Santa Talk: How I Learned to Talk to Kids About Santa. His research led to his being able to give great advice on the moment your child approaches you with the sometimes stressful Santa question.

The good news is: you can let go of your anxiety and fear over having “the Santa talk” with your children. The vast majority of adults had a positive “Santa talk” experience as kids; so much so that most of them wanted to recreate the moment with their own children. That means parents are mostly getting it right when it comes to discussing Santa. The other piece of good news?

So if your kids have been asking about Santa, grab a snack, relax and enjoy these additional fantastic “Santa talk” tidbits you can put to good use right now, courtesy of author Ryan Swanson:

1. Let go of the idea that “everything has to be perfect” when you give the Santa talk

My brother had a concern about how to do it perfectly so as to not ruin his relationship with his daughter. When I started talking to people, I was conscious that they were thinking ‘how do I not get this wrong?’ ‘How do I do this perfectly?’ The biggest misconception is that this moment has to be perfect.

2. It is o.k., even healthy and positive, if your child cries during the Santa talk

There was a common reaction among kids who believed in Santa, and it always involved tears. It seems to be unavoidable. It didn’t matter what geographic region the person was from. But along with the tears, on the other end of the spectrum was relief. The vast majority of people who I spoke with wanted to recreate the moment they had as kids even if they cried. What that tells me is they liked it. The idea is that on a small scale, every one of these kids went through the five stages of grief, which is part of the model of integrating new information. We mourn the loss of old ideas. The crying is just about moving through the moment of “things are different now.” 85% of people I talked to broke through that and transformed it into something they want to recreate with their own children. For some it was the best part of the holiday. They want to do it again because this practice was attractive to them. Grieving it (the loss of Santa as a separate entity from their parents) was necessary.

3. If you have a happy home life the other 364 days of the year, your Santa talk will make a positive impression no matter what words you actually use

The part of the pattern that became really obvious was if things weren’t so great at home, and mom and dad weren’t emotionally available, then losing Santa was a real blow. For those kids, losing the man in the red suit meant they were left with just mom and dad, and that was a really tough realization. The holidays weren’t that special anymore. The special thing happens when you create your own tradition. When things are good the other 364 days of the year, the Santa talk makes a positive impression. The parents who went through it most gracefully were able to ask themselves about “what’s important” all year round. It comes back to “what is my Christmas about?” They were the people who were just simply present and emotionally available for their children.

4. There is no one age that is “too old” to believe in Santa, and you are the expert on your own kids

There’s no definite age that is considered too old to believe in Santa. There’s no standardized way to do it and there’s no consensus. It’s when the kids stop having fun. It’s when a kid becomes old enough to stop having fun with Christmas and it’s become a responsibility (to keep up the façade of believing) instead. As opposed to an age, the tipping point is when the kid is feeling pressure and they begin to misunderstand their responsibility to their younger siblings. If you have a fairly intuitive eight year old and they have younger siblings, it may be a situation where you may want to take them aside and say “listen, this is what Santa means to us and I want you to have fun with it. I don’t want you feel you have to keep (your belief in Santa as a separate entity from the family,) I want you to enjoy it.” Parents are the experts in their own families. Intuitive parents will know when the right age is.

5. Stop worrying that your kids will feel they’ve been “lied to”

Out of the adults I talked to, the number of people who felt lied to was very low (about 5%.) Most people actually wanted to recreate the moment with their own children because it was a positive formative moment. I invite parents to think about what this means. It’s less about the actual words used than “what am I saying? What do I want to pass on? What is my family’s tradition of overall virtues and values?”  The talk should capture what your life is like together as a family. The small percentage of adults who felt that they had been lied to were the same ones who said “when the guy in the red suit faded I was left with mom and dad and the holiday wasn’t that special anymore.” The special thing happens when you create your own tradition.

6. It’s not the end of the world if other people “spill the beans”

It’s unrealistic to think we can bubble wrap our kids that way. The best way to handle it when other people spill the beans is to realize that it gives you an opportunity to have the discussion about your values and about what Christmas means to you; because the child has now found out, you have the opportunity to be part of that ongoing story.

7. Forget about coal in the stocking

That idea of coal should be used sparingly if at all. That’s negative reinforcement and the adult was the one who was making it happen. If you’re using negative reinforcement a lot; your kids are going to have the memory of that too: “You were magic but you were always threatening me with coal.” If there’s a thing to stay away from, it’s using negative reinforcement. The thing to come back to is to remember what Christmas is about. Is it about me or is it about sharing and understanding? Is it about my maintaining control or is it about letting them in on a special family tradition? Once they’ve confronted you, don’t lie and try to rekindle the belief. Really listen.

8. So, what exactly should I tell my kids about Santa?

It’s important to make it a conversation. Some parents say “Dad and I are Santa, and we want you to be part of that, too.” some parents say “It’s hard to explain, and that’s why we use the guy in the red suit to express the traditions that are important to our family.” Many people have fun with letting the oldest sibling in the family help out and play Santa. Everyone’s experience is valuable. It might not turn out exactly how you have it in your head, and that’s o.k. It might be different than your expectations. Just by virtue of being concerned about the moment, you’re already crafting something pretty great. Don’t let it be about what you want; let it be about what your kids need.

11 Responses to "Kids Asking Questions About Santa? Here’s Exactly What You Should Tell Them"